Disney has released a free iPad app called Cars 2 AppMATes that works with actual physical toy cars placed on the iPad screen. Kids today are lucky to have such amazing toys right? So, as the name suggests the AppMATes app uses the iPad screen as a virtual mat, and responds to miniature cars sliding on the iPad screen. The app reads signals from sensors on the bottom of toy Cars and gives kids the ability to either race, complete challenges or just explore the map. Naturally the toy car characters are from Cars 2 and the map is of Radiator Springs. While you can actually use your fingers to play the Appmates game on the iPad, for optimal interactivity you’ll need to buy specially designed toys. The Appmates toy cars sell for $19.99 for a set of two, and there are a total of 4 characters available. You can grab AppMATes cars at the Disney Store or online at DisneyStore.com sometime next week. 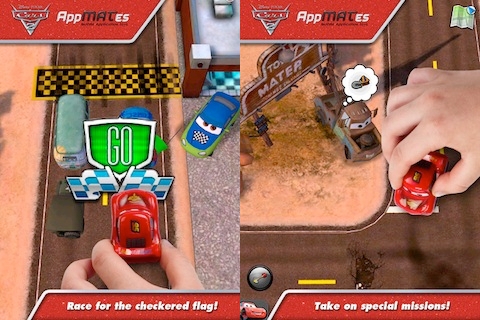 Once you start the app on the iPad you’ll be shown a video introduction that shows you the features of Cars 2 AppMATes. Then after a loading screen you’re in the main game screen. In my case the app crashed as soon as the video finished playing and I had to restart the app and watch it again.

If you don’t have a toy car yet tap on the Lightning McQueen icon in the bottom right corner, then tap the Paper Toy icon. The initial scene is at night, so it’s dark out and you’ll hear crickets and howling in the background. Place two fingers on either side of the car to start your engine and get moving. Lift your fingers to stop. You can’t go in reverse in the game but you can turn around and go back any time. When you see a dotted car outline on the road, park there to get instructions. Just follow the green arrow to get started.

Racing your Appmates car in this virtual world is pretty fun. Each car has its own set of characteristics and voice prompts. The cars also interact with virtual objects in the game, so you can knock over other cars or hit obstacles along the way. There’s a ton of really entertaining commentary in the game when you hit other characters and the Cars characters also make comments as you drive around the map.

After completing a mission you’re given a prize, and the first prize is a horn. You’ll also collect hubcaps and use them to upgrade your tires. Your inventory of gadgets, fuel, horns, and tires is shown in a slide up menu on the bottom of the screen.

There are also hidden objects and fun places on the map to discover. For example there is a mirror in the app where you can place your car down and view a virtual reflection that changes as you rotate your car.

You can turn night into day by parking your car on a Sundial in the direction of the sun. AppMATes then magically turns night into day while you watch Radiator Springs in the background. In my case, unfortunately the app crashed a second time after this transition. 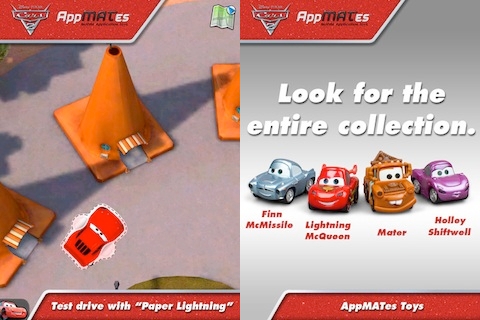 If you ever get lost, tap the map on the top right to see Radiator Springs and place a green pin where you want to go. Then follow the green arrow to get there.

You can enter races in the game too. After each race you can win coins that can be used to upgrade your car with addons like a rocket launcher. The has a total of 5 race tracks.

It’s much more fun & easier to maneuver around town using the toy cars than your fingers, but both work quite well. Try to keep the car in the center of the screen and not on the edges. This way your car moves faster, and you’ll be able to see what’s coming up ahead as you drive.

Besides the random crashes in the game there are not many other issues with the AppMATes iPad app. I would like to see an option where you can turn off the audio cues from the guy, since they can get pretty annoying after a while.

The four cars available at launch for Appmates are: Lightning McQueen, Tow Mater, Finn McMissile, and Holley Shiftwell. In November 2 additional characters (Francesco Bernoulli and Shu Todoroki) will actually be available for sale at the Apple retail stores and Apple Store online. As you collect more AppMATes Cars you can store them in the app under the collection menu. Appmates supports both iPad and iPad 2 devices.

Disney will also start to sell a set of innovative iPad accessories for kids including a protective iPad case for Appmates, a Disney Pix Camera with iPad connection kits, and a Disney Spotlight mic for wireless karaoke singing.