Toppling Towers is one of the latest iPhone, iPod Touch and iPad game releases from Big Fish Games, Inc. The app is very simplistic in its design and play making it great for kids but perhaps not so much for adult gamers. Older players may be left wanting a bit more and choosing other applications on their iPods instead.

The concept in Toppling Towers is fairly simple. Destroy towers with a slingshot, defeat the evil princess and win the prize. Gameplay here is almost identical to Angry Birds, just replace the birds with rocks & fireballs, the nests with towers, and the pigs with humans. While simple games are normally a perfect way to waste a few minutes (or hours), Toppling Towers’ simplicity turns the application into a bit of a yawn. One can only toss so many boulders at so many castles before they start down the road of boredom. 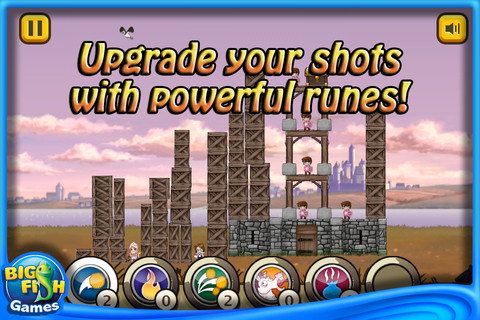 Controlling the app is a bit of a contradiction. Level selection and control are quite easily accomplished by finger movement but the screen must be zoomed in and out to see what you’re actually aiming at. Your catapult and castle are never in view at the same time making things a bit frustrating, not challenging.

You might enjoy the humor and edgy screams which have a slight South Park resemblance. As you destroy towers in each level, you are awarded various additional runes and weapons that you’ll need in upcoming stages. A horse talks you through any additions to Toppling Towers although his jokes become mundane and could optionally be completely done away with. Because the instructions are given by word and not sound, children playing the app must be able to read beyond a 2nd grade level. 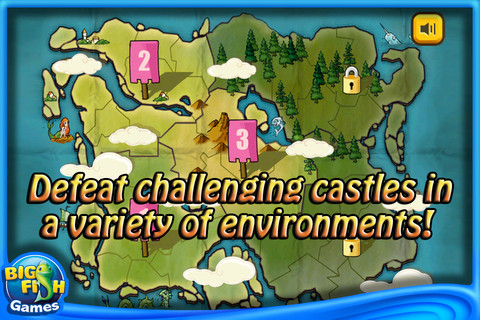 Colors are bright and set the app off well, the developers simply missed the boat when it came to gameplay. The graphics of Tumbling Towers use 2D cartoon drawings and there is very little animation. The maps and the levels are basic, the catapults are difficult to see, and the people in the tower are barely discernible from the towers themselves. The most complicated graphic seems to be the horse in the corner of your screen.

The soundtrack of the app suits it well. A jaunty, medieval theme permeates the background and the snap of the catapult is crisp and clear. However, because of the separation of weapon and target, you must stay on the screen to see if you’ve won. Should you choose to hurry back to fire another boulder, you may find that you’ve killed your targets when you hear them scream. Again, a feature that would have been better served by a better visual display.

Overall, for a free iPhone app, Toppling Towers is a good download. If you love the game, fantastic, and if you hate it, you’ve not lost anything.