Grand Prix Story is a racing simulation game that is available to download on your iPhone or iPod touch for a price of $3.99 (on sale for $1.99) in the App Store. Grand Prix Story was developed by a Japanese gaming company named Kairosoft. The app allows you to become the leader of your own racing team. Once you become the owner, you can train drivers and find sponsors to help improve your chances of winning. After building your perfect car, you get to race the car against the other drivers in the Grand Prix. This may seem like a lot for someone that is not huge racing fan, but Grand Prix Story makes the gameplay easy enough that anyone can build a great racing team. 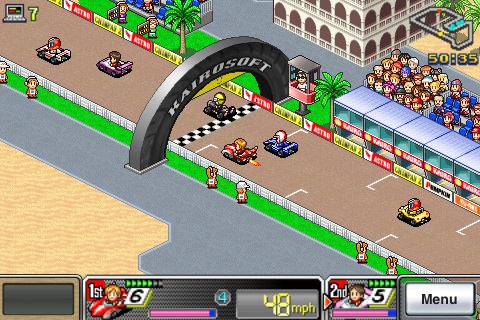 Unlike most racing games on the market today, you will not be controlling any of the cars. Since Grand Prix Story is designed for you to become the owner, all of the races are automatically given. The success of your car in the race depends on how well you trained your driver and build the car. This means that there are not many controls to worry about. You just go through the menus to get your driver, car and sponsors ready for the next race.

The audio found in Grand Prix Story is solid but nothing too spectacular. There is no reason to force you to listen to the audio while playing Grand Prix Story. The music and sound effects are standard for what you would find in most Japanese games. Since Grand Prix Story was developed in Japan, the audio is available in both English and Japanese. 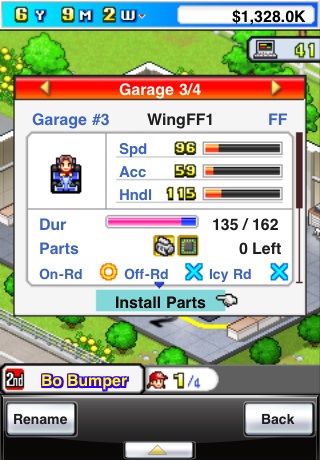 Grand Prix Story is a fun game that will take days to complete and has great replay value once you are finished it the first time. This allows Grand Prix Story to be a decent value despite the higher price tag of nearly 5 dollars. There is always something that you can try different on your car to get a different result, which will make you keep coming back.