Every new iOS game advertises itself as fun and original, but Groove Coaster by Taito actually delivers on that promise. The concept in Groove Coaster app is simple: Navigate a glowing orb through a wireframe maze. The execution, however, is challenging and addictive. The application costs $2.99, requires iOS 4.2 or later and is a universal iPad , iPod touch and iPhone app. In other words, you purchase once, download once and then install it to all of your devices.

In Groove Coaster, players navigate their orb by tapping circles that appear on the screen. This seems overly simple at first, but it quickly becomes apparent that while the board appears flat or 2D, the circles actually exist in a 3D space. As play becomes more challenging, relying on visual cues isn’t good enough. What makes Groove Coaster so much fun is that the circles appear on screen to the beat of the background music, and the player reacts to that. 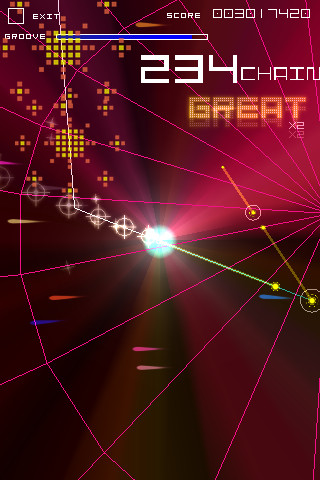 Our only gripe with this app is that it doesn’t support a custom playlist. Instead, it has a built-in library of 15 digital tunes that invoke the classic arcade games, such as Space Invaders. Since Taito has tightly coupled gameplay with the chosen songs to maximize the challenge, we understand why. Nevertheless, diving into your own music library would give this app a vast amount of “replayability,” and we’d have been willing to pay more than $2.99 for it too.

Having said that, the 15 including songs are unique, and there’s great contrast between them. There is also an excellent selection of boards, so at no point does it become repetitive. Something else that helps in this regard is the RPG-lite system. Each time you complete a board you earn XP. When you earn enough XP, you level up, and at level up, you can unlock skins, avatars and avatar upgrades, which provide various bonuses, tweaks and so forth. 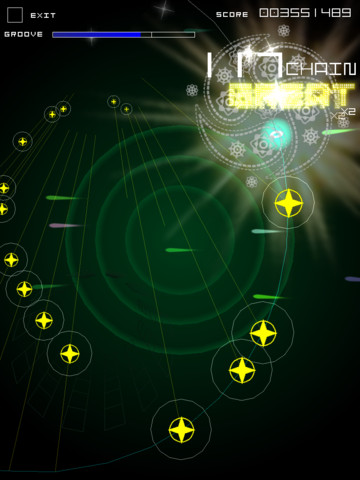 Each Groove Coaster “track” has three difficulty levels, and you might need those power-ups to complete them on the hardest level. Later, you’ll do without, and you can use the Game Center leaderboard and the Facebook integration to compete against others. For the diehards, each Groove Coaster board has a perfect score, and you earn bragging rights and claim your place in the Groove Coaster Hall of Fame by achieving those perfect scores.

Apps that tightly integrate music into the gaming experience are nothing new. On the iOS platform, it’s become a genre onto itself, but more often than not, these games come up short in terms of gameplay that engages and has long-term value. The Groove Coaster application is the exception, whether you use it as an iPad , iPod touch or iPhone app . The bigger screen is nice, but the levels scales so well, you won’t miss out by using a smaller one.