Early Bird is a new iPhone game available in the iTunes App Store designed by Booyah Inc. This 5-zone, 120-level game features action puzzle style play. In this game, the early bird really does catch the worm. Its swiping-action-based gameplay is focused around one small birdie’s struggle to catch a nice, juicy worm. Early Bird is marketed to children ages nine and up, but its gentle gameplay and easy to learn controls are sure to appeal to more than just the adolescent crowd.

In Early Bird, every swipe of your finger controls the a small cartoon bird’s flight. The longer you swipe your finger on the iPod touch or iPhone screen, the farther the bird will fly. Each level is an attempt to reach a bullseye with a worm in the middle. Players earn points for low numbers of swipes, reaching the bullseye as closely as possible, reaching the bullseye relatively quickly, and hitting bugs along the way. 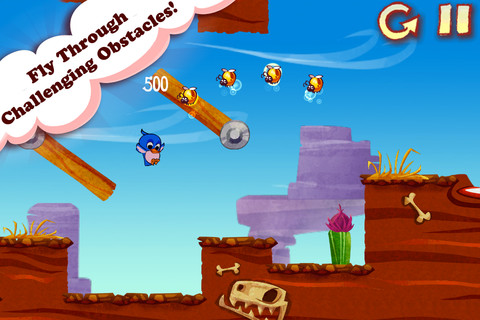 Although Early Birds is simple to learn, it lacks intuitive controls. With a bit of tweaking, or maybe even an entire revamping of the essential gameplay swiping function, it would become at the same time less difficult to learn and more challenging to master.

The beginning levels of Early Bird are extremely easy, almost too easy. If you have a lot of similar casual gameplay experience under your belt, you may be bored until you get to higher levels. One great way for the developers to fix this issue would be to give an easy, medium or hard option for early levels. 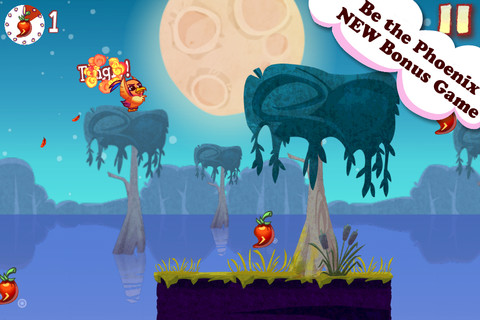 Early Bird’s sound effects are quite charming, and suit the overall style well. Upbeat background music, combined with chipper birdie sounds, add to the overall playing experience. However, there is nothing particularly unique or impressive about the music, which means plenty of room for improvement. More complex music and surprising sounds would add a lot of much-needed interest.

The graphics of Early Bird, similar to the sound effects, are appropriate and well done but nothing particularly out of the ordinary. They are cartoon style and admittedly extremely adorable and endearing, but they are not very memorable and certainly do not add much to overall rating of Early Bird.

Overall, Early Bird is very cute and has plenty of potential. Its newly released Halloween expansion shows that the developers are still working on making fun improvements and updates. It is a free, no-risk iPod, iPad or iPhone app that will let you entertain yourself if you have a big of free time. It is a fun, albeit facile, game that is not the most unique available thing on the ever-growing gaming applications on the iOS platform.