Anomaly: Warzone Earth HD by Chillingo Ltd is a clever twist on the now-classic tower defense genre on the iPhone. Let’s face it: Tower defense is probably not a game style with much long-term potential. Tower defense fans have seen just about all it has to offer, and if the genre becomes any more ambitious, it will simply become an underwhelming RTS variant. Nevertheless, Chillingo has managed to breathe some fresh air into the concept simply by reversing it.

At only $1.99, A: WE HD is a fantastic value. It also comes in a universal package, which means that the one download installs as an iPod touch, iPad and iPhone app. As both an iPod touch and iPhone app, the graphics are incredibly sharp, and the gameplay is just as exciting. However, if you have the option, we highly suggest playing this app on your iPad because it actually gives you an expanded viewing area. That adds to your enjoyment, and it adds to your strategic options as well. 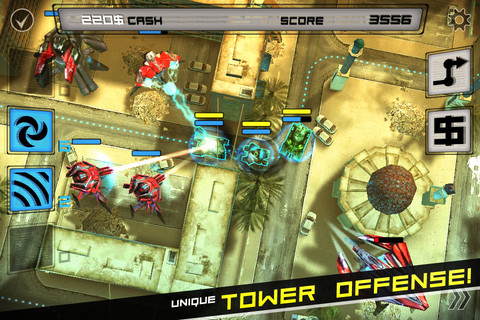 The setup for the Anomaly: Warzone Earth application is this: an alien spacecraft has crash-landed in Baghdad, and after doing so, it erects a strange force field. At the beginning of the game, all the military has is unconfirmed reports that whoever was on that ship is setting up a perimeter around the wreckage. This could be an invasion, or it could be aliens trying to repair their ship, and then get out of Dodge. The military won’t sit idly by, however, so they’re sending you and your team in.

What distinguishes A: WE from other tower defense apps is that, at least in terms of gameplay, you’re the invader, and the computer opponent is the defender. The aliens have a vast array of weapons, and you have to use your troops efficiently to survive the gauntlet, usually by strategically flanking and taking out these weapons independently or in small numbers. This approach is particularly neat early on when you don’t know the weapons yet, so it’s a true alien experience as you apply trial and error. 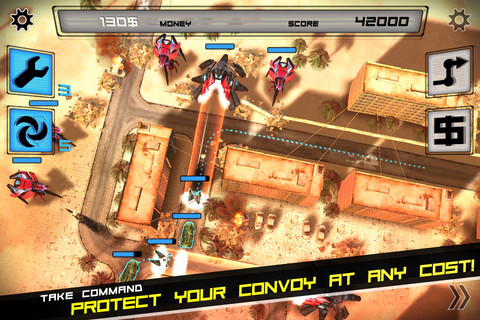 The Anomaly: Warzone Earth application provides two basic types of units: scout and combat. Scouts allow you to survey the area, pick up power-ups and relay resources to units within the convoy as it’s on the move. That becomes vital later on as the boards become more challenging. All other units are part of the convoy, and they include APCs, launchers, shielding vehicles and a wide range of other units and upgrades. 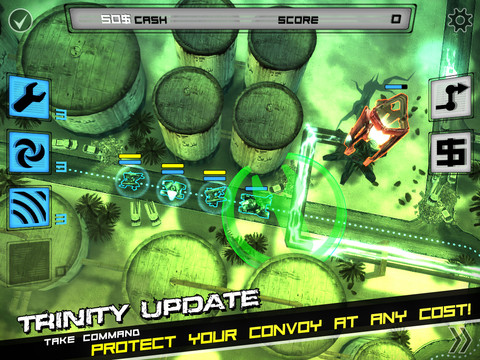 What’s most interesting about the reverse approach is the amount of strategy involved. It seems like much more strategy than your average tower defense. Chillingo has even integrated a high-level view of your convoy. Of course, you can make all decision real-time, but the high-level view gives you awesome control to set the paths and other aspects. It’s almost possible to execute a hands-off completion of a level, but the app will always find a way to surprise you and cause you to react.