D’oh! The iconic word said by Homer of the animated T.V. show The Simpsons. Most of us have grown up watching the show and seen merchandise made from it. I remember going to the arcade and playing The Simpsons Arcade Game. It was a memorable yet difficult game when I was a kid. I’ve spent five dollars but I beat it. The Simpsons Arcade is an app with many references to the show. So when I saw this app on iTunes I had to check it out and see how it compares to the arcade game by Konami. The Simpsons Arcade by Electronic Arts is an app for the iPhone, iPod Touch, and the iPad. This game is a beat-em up just like its predecessor. 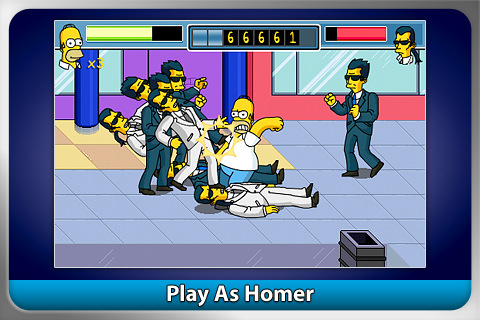 The Simpsons Arcade shares many similarities to the arcade classic such as references to the show, story, and gameplay. Like many beat-em ups, you move around the field, collect items and defeat foes. Unlike the arcade game, this app only allows you to play as Homer but other members of the family will show up as special item attacks or family frenzy attacks. An example would be Bart being carried on Homer’s shoulders while firing projectiles from his slingshot. You move with your left thumb and jump and/or attack with your right. There is a combo attack, a stun attack, and a charge attack which is the only way to hurt certain enemies. Pausing the game can be a bit annoying because you have to drag two fingers down the screen. This can be troublesome when you’re fighting many enemies. There are two minigames which gives you an extra life and another game where you slap Homer to wake him up when you lose all your health. One minigame is to quickly inflate Homer’s head. If I remember correctly, this minigame was in the previous game. The other minigame is to eat as many donuts as you can. The bosses in this game are characters like Mayor Quimby and Mr. Smithers. This app is similar to the original game with several differences such as playing as Homer only and iPod music support. 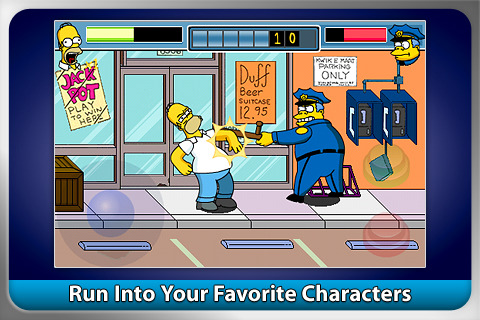 The graphics in The Simpsons Arcade are crisp and polished. Sometimes the background can be fuzzy. The layout is like an actual arcade cabinet with joystick and buttons. The only problem I have is the lack of variety for basic enemies. It gets repetitive fighting stage after stage of guys in suits. The graphics are colorful and bright. Most of the references are the characters themselves. Flanders, Moe, Krusty, and others will appear to either give you an extra life or fight you. You can see memorable things and places from the show like Lard Lad and the comic book store.

The audio for The Simpsons Arcade is spot on. The characters say a few random words. When they do say something, I can hear the voice acting talents of Dan Castellaneta and others echoing through my ears. The iconic theme song is in here but sounds a bit different. The in-game music is generic and repetitive but you can listen to music you’ve downloaded since it has iPod music support.

The Simpsons Arcade is $0.99 on iTunes. Comparing this game to the arcade game is difficult since they are not the same game and they are on different systems. The arcade game has more variety and you can play as Marge, Bart, and Lisa, in addition to Homer. There are also different enemies to fight with. The stories are different but similar since it forces Homer to go on an adventure of sorts. This app has better graphics and music support. If you leave the game, you have to start over from the beginning of the stage you are on. This game is very repetitive. I do like the references to the show like characters and locations as well as the sounds. I feel this is a game that I’ll play a few times and that’ll be it. There is a free version for download but I think it only lets you play the first stage. If you’re a fan of the show or you’re interested in this app, I suggest getting the free version first and see if you like it.