DynaStunts is an arcade racing game for the iPhone, iPad and iPod touch from DanLabGames. I immediately opened DynaStunts app after finishing the installation process on my iPhone and was greeted with some funky music at the main menu accompanied by my cartoon-like racer I’d be controlling. You have the choice of picking between five different cups, with each one having a different difficulty level. I noticed that each cup was already unlocked, so experienced users can hop right in and skip the easier tracks right away.

I decided to go with the Farm Cup, which is the easiest of them all. You won’t be racing against other players, but you will be racing against time while dodging numerous traps and other objects that’ll cause you to fail the match. It didn’t take me long to realize that even the slightest bumps to the head would cause me to lose the match. It doesn’t take long for players to get the hang of it, and I slowly noticed that after each attempt I was getting a little better. After finishing a track your score will be based on how many stars you collected, the tricks you performed, and how long it took you to finish the track. 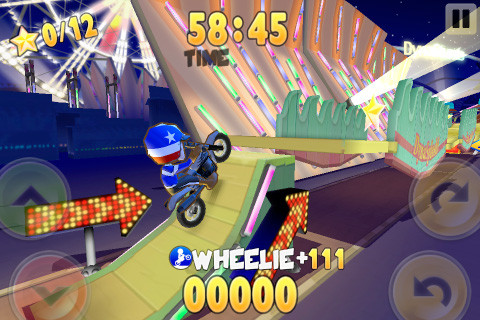 Each track features different obstacles and usually include some sort of power up that helps your progression through each track. So far I’ve only encountered two different power ups: one that made your bike turn into a helicopter-like machine, and the second being a speed boost.

My only complaint is that there isn’t anything to unlock. If DanLabGames added the ability to unlock bikes depending on how many tracks you’ve played, I think DynaStunts players would have a reason to play more. 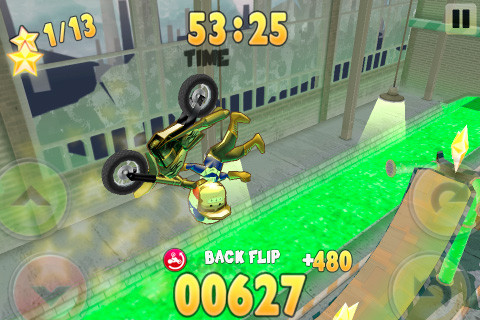 Concept:
Race against time in a track filled with dangerous obstacles and power ups to help the racer win.

Controls:
A little confusing at first, but the controls are easy to get used to. You can accelerate, brake, and tilt your bike with four different buttons.

Audio:
The game has some pretty funky music, and I mean that in a good way, to accompany the realistic audio of DynaStunts. There’s a sound for pretty much everything.

Graphics:
DynaStunts has a cartoon art style that works wonders for this application . Each track is detailed beautifully, even the animals and background environment.

Value:
$2.99 is a fair price for this application , but it’s easy to get bored of it quickly. Like I mentioned earlier, DanLabGames should seriously consider adding things to unlock in DynaStunts, such as bikes or clothing.

DynaStunts has excellent graphics and audio, but little value. With a few updates however, DynaStunts can easily provide hours of fun gaming entertainment. DynaStunts is a great iPad , iPod Touch , or iPhone app .