Get ready to be blown away! EPOCH is an example of how a real shoot ’em up iPhone app should be made for the iOS platform. You wake up as a robot in what seems to be a post-apocalyptic world, surrounded by destroyed buildings and a gloomy atmosphere. As you slowly boot up, the robot’s heads-up display reminds you of your objective: Find and protect Princess Amelia, located in Cryo Tower.

Before you know it, a group of robots, known as “Gunners”, close in on your location. It didn’t take me long to realize that EPOCH uses a cover-based action system throughout the game , limiting the player to one small section at a time. While this restricts players from exploring the world, it makes an excellent combat system that works very well in EPOCH. Avoiding enemy weaponry is as simple as sliding your finger, moving the robot from cover to cover. After fighting off enemies in the area, EPOCH automatically moves the robot into another line of defense, where more enemies attempt to close in on your location. 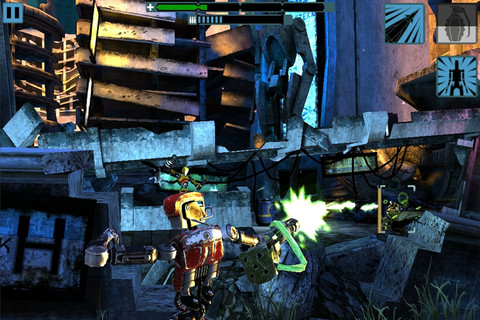 Each level in EPOCH is beautifully detailed with rich graphics, made possible by Unreal Engine. The beginning of every mission starts where the last mission finished in the world. After a successful mission you earn items, data, experience, and credits. The intercepted data you obtain helps explain the story of EPOCH, but other than that, a story isn’t really present. Credits can be used to purchase equipment, such as weapons and armor. The campaign is fairly short, but it has a fairly large replay value. Please note that EPOCH is not a game for RPG lovers. You can level up, buy items, and advance in the campaign, but the story isn’t very present and exploration is minimal. 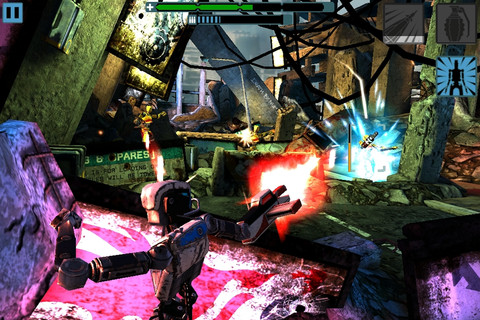 Concept:
Cover-based shooting in a post-apocalyptic world filled by dangerous robots. Players can earn experience, credits, and upgrade their equipment.

Controls:
Uppercut Games made controlling the robot as simple as possible. Tapping enemies will target and attack them, while sliding your finger will move the robot behind different areas of cover.

Audio:
The dark music fits perfectly in EPOCH’s apocalyptic world. Each sound, whether it’s from a menu click or a weapon, is of high quality. Without the audio, you’ll be missing a chunk of EPOCH.

Graphics:
The Unreal Engine was used to create the beautiful graphics in EPOCH. Uppercut Games shows off the graphics iOS devices can support.

Value:
EPOCH has a short campaign, but a large replay value. A great iPod Touch , iPad , or iPhone app that is well worth the money.

Overall, the graphics, audio, and gameplay all combine in EPOCH to create a high quality application for gamers of all types.

Here is a video demo of the EPOCH. app on the iPhone