Major Mayhem is a new iPhone app title from Adult Swim, joining the ranks of mobile games to go along with their other titles such as Amateur Surgeon, Bring Me Sandwiches, and Five Minutes to Kill Yourself.

Adult Swim has a way of taking innocent concepts and making them extreme. In Amateur Surgeon, they mixed the innocence of the game Operation and added dark humor. In Bring Me Sandwiches, they made a 2D version of Katamari that had me laughing as much as it had me happily frustrated with the puzzle aspects. 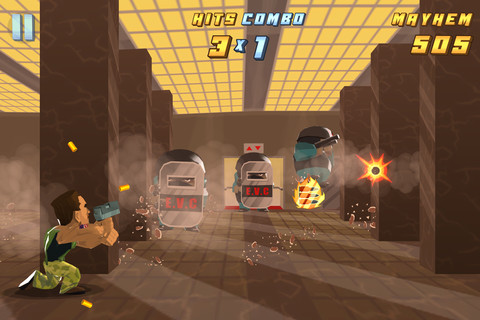 Imagine mixing one part Duck Hunt with one part Sergeant Slaughter and then giving the ducks throwing stars. That is the basic concept of the Major Mayhem application . As the ninjas pop out from the various locations the player has to touch them quickly to get points. When touching the ninjas, Major Mayhem comes out from behind his cover to shoot. The player gets more points for combos and quick kills. As the player goes through the stages, they get tougher. Ninjas with hats appear early on. They throw red ninja stars instead of the normal blue ninja stars. The player has to hold their finger on them to shoot rapidly and kill them because their red stars hurt even behind cover. I like shooting their hats off. The player can also shoot the chickens between the action stages. I got points for Chicken Combos. What other iPhone app can provide that? 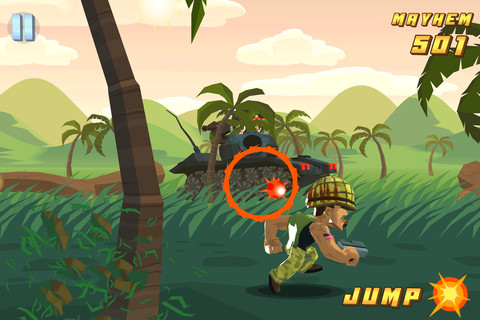 The organization is very much like other iPod touch and iPhone games. There are main levels and sublevels. The three main levels are Tropics, Metropolis, and Desert. Each of those main levels contains 15 sublevels. The storyline has you traveling through the various levels not only to fight off the ninjas but also because your girlfriend has been kidnapped by those ninjas.

The controls are intuitive. Touch the ninjas to shoot them. Use a two finger tap to jump during the running stages between the action stages (those points in the game when you are shooting ninjas). They are simple and elegant.

The graphics and audio are both well executed. From the screens of Major Mayhem on the Internet, it looks like it is strictly composed of 2D pixels, but Major Mayhem is in full 3D. The visuals are a joy to look at on all iOS devices, including the iPad . The music and sound effects are also spot on. They help immerse the player into the experience.

Adult Swim has put together quite a few fun and entertaining apps. Major Mayhem can be proud not only to be a soldier, but also to be included in the wonderful lineup of mobile entertainment that Adult Swim has provided for iOS device owners.