Battle Nations is a universal app for both iPhone and iPad users from Z2Live available for free in the App Store. At the start of Battle Nations, you’re introduced with the background history of Ateria, the land in war between the leader of Ateria and rebels. You’re promoted to a Captain and it’s your job to fight off the rebels. Both you and your enemy share a chunk of land to battle, taking turns firing at each other. Battle Nations features a strategic turn-based combat system. When it’s your turn, you select one of your units out on the field to attack. When you’re done attacking, it’s your opponent’s turn. Simple enough.

Players have a large variation of units to use in battle, ranging from artillery to sharpshooter units. My two favorites are the Tank and Heavy Gunner units, both delivering a large amount of damage to the opponent. After I finished the first mission, I was taken away from the battle and was introduced to my own village for my troops. This village gives you a large variety of options, allowing you to build shelter, grow food on farms, and even collect money from your own troops. The village I built for myself was soon confronted by raiders. Using the turn-based combat system, I defeated the raiders with my troops. Battle Nations isn’t just about combat, it’s about creating and maintaining an army. 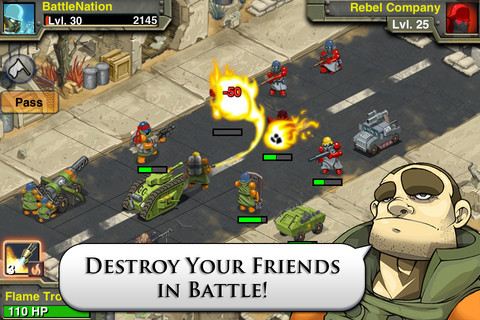 As you progress in Battle Nations you’ll unlock new structures and units to use in battle. The tasks given at hand by your lieutenant and other inhabitants of your village will keep you busy throughout your conquest. With the help provided by my inhabitants, I was able to build a village ready to battle. In it contained supply depots, mines, barracks, shelter, camps, and a variety of other structures. The story starts off a little slow, but eventually you’ll have an empire of troops at your disposal. You’ll use your village and army to fight for victory.

Battle Nations features an intense audio soundtrack, but it’s nothing special. The graphics aren’t amazing, but they’re unique and give Battle Nations its own style. The controls consist of tapping only, so not much effort is required to play. It’s a wonderful iPad and iPhone app, but the iTunes page doesn’t specify if it supports the iPod Touch. 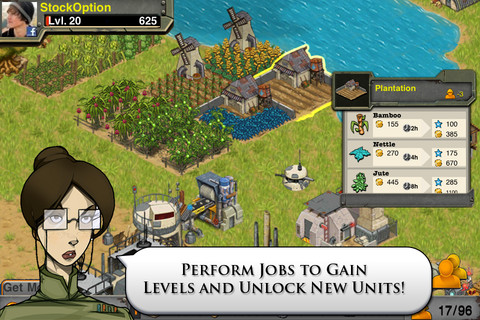 Did I mention Z2Live made Battle Nations a free to play game? It’s worth the download. You have nothing to lose, but plenty to gain: over 130 missions, PvP battles, an excellent strategic turn-based combat system, and an excellent city simulation. Whether you’re a fan of the combat system or village and army control, you’ll enjoy this one. Try it out for yourself, it only takes a few minutes to install this application.