The new Superman app for the iPhone and iPod touch might well be the best Superman video game ever made. Of course, that isn’t saying much, considering Superman 64 leads that very short list prior to this installment for the Man of Steel. Developed by Tiger Games and published by Chillingo for iOS, this go round for Clark Kent and company works well enough for the small sticker price of 99 cents.

Graphics
Superman is a pretty flashy comic book character, and Tiger Games has done him right with their visual style in this application. The graphics for Superman are a highly stylized cel-shaded comic book style, with bright colors popping into the foreground of the screen and illuminating important objects, while the darker tones and more subdued shading illustrate the backdrop of Metropolis. Action graphics are simple, yet work well. 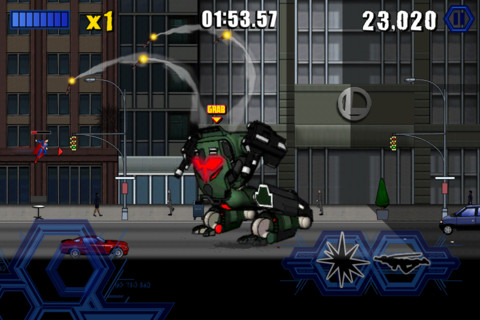 Audio
The sound effects for the Superman iPhone app is quite lacking, but that is more due to the small speakers of the iPhone than anything else. For an iOS app, Superman does sounds relatively well, on the iPod Touch and the iPad, the audio effects are much more passable. Still, the audio in Superman isn’t going to make or break the overall quality of the product. 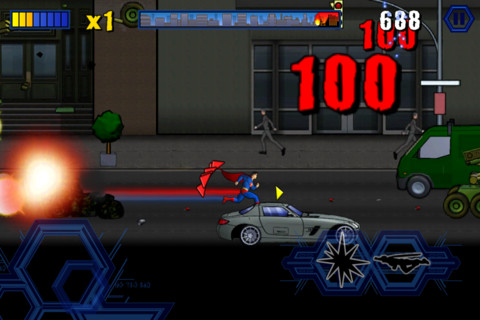 Controls
Ah, the achilles heel of any iOS game is definitely the control scheme. Unfortunately, any touch screen or wheel mouse based app is going to have precision control problems. That is the case with Superman for the iOS, and it is a darn shame for any platform-beat em up to suffer from wonky controls. With a normal controller or a keyboard and mouse combo, Superman would probably be much less frustrating, and much more rewarding. As it stands, double-tapping the iPhone screen for an action is often misread by the controls, causing Superman to jerk violently out of control for a second. If i had a penny for every time I have overshot a falling meteor, or accidentally punched a civilian in the past week I would be rich. These problems are not the only ones in Superman either.

Overall
While the gameplay makes sense and is generally good, the control scheme and repetitiveness of Superman for the iOS are annoying. Even then, the level and enemy design is interesting, and should account for a great mini-app.

And yet, Superman would be a good iPhone app despite these negatives, if not for the frequent bugs and crashes I encountered probably once every 30 minutes of playing time. It got to the point where I would simply shut down the app after 20 minutes, rather than have Superman incomprehensibly fly off of the screen multiple times during a boss sequence. In the end, if you are looking for a fun, casual superhero app, Superman for the iOS is about as good as it gets, so far at least.