Every once in awhile I will come across an iPhone app that is just interestingly bizarre. SmashMouth games has released such an app with their new title, Russian Dancing Men. In a new take on the standard rhythm game formula, Russian Dancing Men asks you to lead a group of, well, Russian men, as they progress down the dancing path. Of course, the dancing path is littered with all sorts of obstacles like spikes and loops which you must help them navigate. Is it silly? Absolutely. But it’s an original take on a genre that has seen so many clones and remakes, that it’s hard not to enjoy. 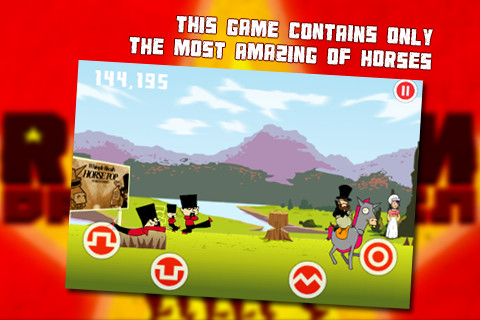 Perhaps the star of the game isn’t the the gameplay or the dancing men, but the songs that they sing as they make their way down the dancing path. All the songs are songs are really very funny, though they make no apologies for their stereotypical characterization of Russian culture and dress. Ultimately the songs will progress in speed and difficulty as the obstacles reach the dancing men faster and faster leaving your fingers searching for the right buttons. In more difficult levels, obstacles will combine forcing you to simultaneously tap both obstacle buttons (think chords in Guitar Hero or Rock Band). 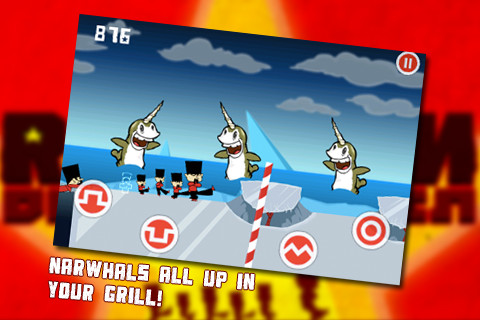 When you successfully avoid a number of obstacles in succession, a new dancing man will appear at the back of your line which is important because if you miss an obstacle, the dancing man at the front of the line will fall over and no longer be dancing with the others. If you miss enough obstacles, there will be no men left dancing and the level will be failed, so it’s critical to try to keep a sizable dance troupe to avoid an early elimination from the song.

In addition to the great songs present in the game, Russian Dancing Men also includes some hilarious flash animated cut scenes that set up the upcoming song. Sure, most of these cutscenes (and the songs for that matter) will leave you scratching your head, but I found it nearly impossible to not watch them with a smile on my face. Not to mention that I really enjoyed the sense of story they brought to an otherwise bizarre game.

Russian Dancing Men won’t blow you away with graphics, it won’t win any Grammy awards for its music, and it doesn’t break any ground in terms of new gameplay. But it’s surprisingly addictive, incredibly charming, and is sure to put a smile on your face every time you play. If you’re a fan of quirky games or rhythm games, this is a good one to check out. Russian Dancing Men is a universal app available now on the App Store for $0.99.