SpellTower is developed by Zach Gage, creator of SynthPond, Bit Pilot, and Halcyon. SpellTower is a word puzzle app for use on the iPad and iPod touch. (An iPad was used for this review.)

SpellTower is like a hybrid of Boggle and Tetris. The main concept is to create words by swiping a finger across tiles stacked in horizontal rows. Words can be spelled horizontally forward and backward, vertically, and diagonally. Special blocks have individualized functions that make it more interesting. 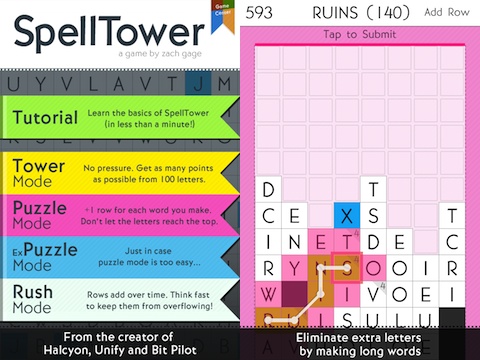 The first thing players will notice when starting the app is a main menu screen with different colored banners running across the screen. At the very top is a green tutorial link that familiarizes players with the rules and play. The tutorial is brief and easy to understand. Users should find that using it once is all they need to grasp it.

Below the tutorial are four playing modes: Tower Mode, Puzzle Mode, Ex Puzzle Mode, and Rush mode. Each varies in difficulty and purpose, providing challenges for a range of all users. Challenges include racing against a timer and additional rows of blocks with each letter spelled, which cements this app as suitable for all ages and interests.

The controls are simple to use, consisting of simple touches and swipes that highlight letters. The design is marked by a very simplistic, yet elegant style. Base colors and sharp lines define the boundaries and layout. It works well during the daylight, but because of the heavy use of white on the playing area and with the tiles, it can strain the eyes in dark locations. 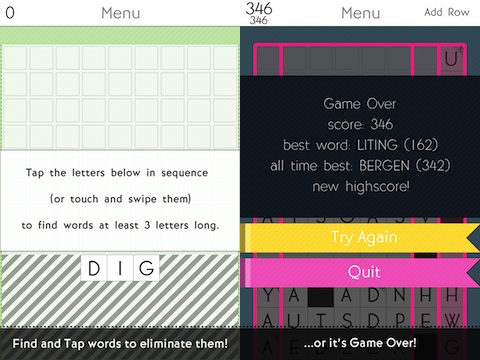 A small selection of sounds designate tile selection, word completion, row removal, and bonus features. However, since SpellTower was designed as a basic word game, a broad selection of music wouldn’t have been expected.

SpellTower currently sells for $1.99 in the iTunes App Store. For people into word challenges, and probably even those who aren’t, it’s worth the value. SpellTower is highly appealing and as of yet, it’s been challenging finding a word that the application’s dictionary doesn’t recognize.

Yet, the true worth of this product is in its concept. It appeals to gamers who crave the challenge of finding long words, or for those who want to engage their minds in spelling words that utilize the bonus blocks. It might not have the high-power graphics and visualizations used for other word apps, but it doesn’t need to. Either way, it’s addicting.