Sin or Win by Toxic Blob is an entertaining new iPad app. The name of the game captured my attention and I had to download the application. The concept in Sin or Win is fairly simple, keep the unsuspecting cavemen running headlong toward a cliff from the fiery pit below by pushing them up to the fluffy white cloud in the sky waiting to take them to heaven.

Graphics are pretty simple; not a lot of detail but I enjoyed the expressions on the characters faces. I also liked the way they made the transition from day to night. 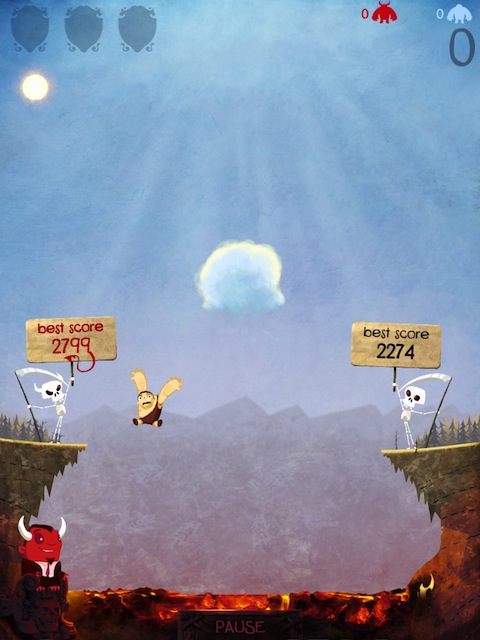 The music is fun and upbeat. A steady beating of drums that you later realize make the action seem more desperate as you frantically push your cavemen toward the heavens. It seems to chant “faster, faster, faster”.

At first the game’s pace starts out kind of slow but before you know it things are speeding up and those clouds are harder to get to. I found myself being my own worst enemy. Sometimes I moved the cavemen too fast and found myself scrambling to keep four or five cavemen from falling to their fiery doom because I popped them out of the cloud with my high speed projectile of a caveman. The more I saved the more complicated it got. Creatures were popping out of the wood work. Mines to dodge, electric bats to avoid and fire breathing dragons I had to drag out of my cloud before they burned my cavemen to a crisp. 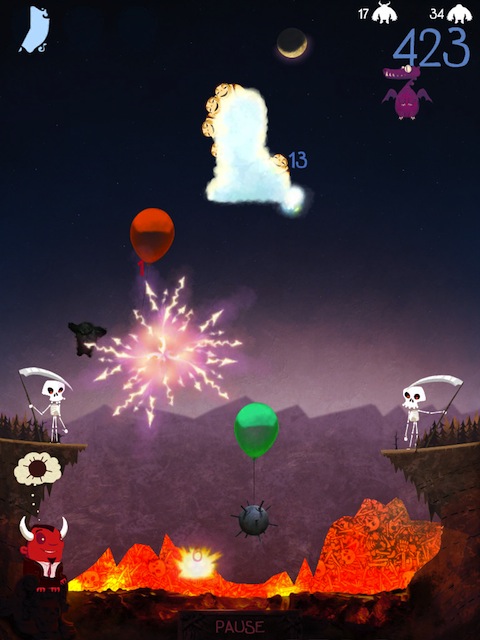 When the fiery pit was finally full and the game was over I couldn’t wait to see how many I had saved and how many I had literally let down. I mourned every caveman I lost. After I played for awhile, I found myself wishing there was a little more to it. I had hoped there were different levels and changes of scenery but no such luck. You stay on the same screen and though the action gets faster, the surprises are pretty much over after the first few minutes.

There are no new creatures or obstacles just more of them on the screen. I take my iPad everywhere and this is fun to play when you are trying to kill some time between appointments. It’s easy to figure out and once you have it down it’s great for occupying your mind while you wait.

I think the game should cost half of what I paid for it, since there isn’t a great deal to do on it, but I have played it enough so far to be happy with my purchase.