For those who enjoy third person shooter games, one of the most popular games to come out recently in the genre has been Frontline Commando. Produced by Glu Games Inc, Frontline Commando can be played on the iPad, iPod Touch, or iPhone and truly takes mobile shooter galleries to the next level.

The plot of Frontline Commando revolves around a group of soldiers who committed a renegade attack on a ruthless dictator in hopes of ending his reign of terror. Unfortunately, only one soldier has survived the attack, and it is this soldier’s job to avenge his fallen brethren and make it out alive. Players must control the soldier through a wide variety of missions and scenarios in order to defeat the enemies and survive the battle. 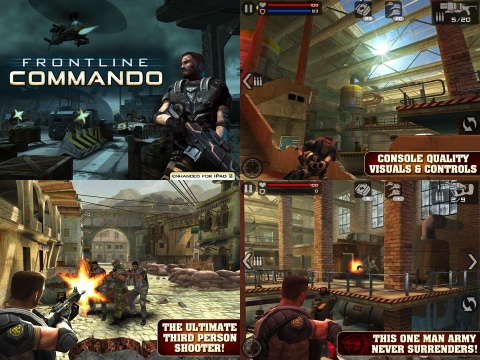 One significantly favorable aspect of Frontline Commando is the vast array of unique and entertaining missions. Players can choose between options such as sniper levels, which require users to have excellent aim and make perfect shots, survival levels, which require players to survive for a large amount of time against a seemingly insurmountable force, or various other types of challenges that are each unique and add to the game dramatically. The numerous style of missions available are effective at keeping the application from becoming repetitive or boring.

In addition to the captivating missions, the graphics and overall environment of the app are particularly impressive. Many mobile games that require precise aiming can be difficult if the graphics are low-quality, as this can make it difficult to aim properly. Fortunately, Frontline Commando has an incredibly appealing environment with phenomenal graphics.

The main disadvantage of Frontline Commando is the high potential costs. Frontline Commando is a free iPhone app and does not cost anything to play initially, which may appear very favorable to those who do not like spending large amounts of money. In order to progress throughout the app, however, it is often necessary to purchase items such as health packs. These items can cost a significant amount of real money, however, and players will likely end up spending much more on this free app than on most games which actually cost money to play. Those who do not wish to spend real money can still potentially complete the app without purchasing health packs or other items, but the difficulty will be incredibly high.

Overall, Frontline Commando is a very enjoyable and high-quality app, but may be too difficult for those who are not willing to invest real money to purchase game items. For those who enjoy shooter galleries and are willing to spend significant amounts of money or are looking for a real challenge, few games can compare in quality to Frontline Commando.