Trenches II by Electronic Arts is an iPad, iPod Touch and iPhone app that involves military strategy and using your weapons and soldiers effectively for victory. This application may not be the most intensive war game, but it is still very fun. If you were a fan of the original Trenches game, you’ll love this new version.

Overview
You can choose between three different countries to play as: Germany, Britain or French. The teams themselves are practically the same, but the characters will look different. Unlock so many war apps that are obsessed with World War II, Trenches II takes place in World War I, which is refreshing to see for once.

So, what is you objective? Take out the other country, of course. There are over 20 countries you can fight, regardless of who you pick, and each one will get harder than the last. Between each round you can spend money to beef up your army.

You can upgrade your offense, defense or support. This will give you more weapons, better health, more effective engineers and so on. Perk points are sold via in-app purchases in Trenches II which is unfortunately where most big gaming studios are heading now to subsidize their dollar games. 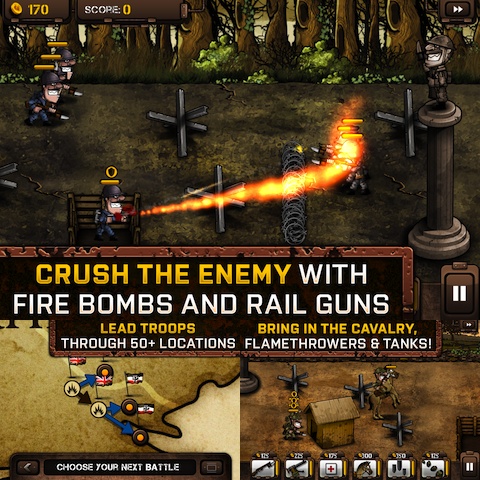 Controls
The controls are pretty simple. You select a team and then drag your finger, commanding the team to go to that location. Most teams are comprised of three to four soldiers. When the team closes in on enemies, an all-out firefight starts. You don’t have to press anything to attack, but you can select different weapons for your team to use.

There are plenty of weapons, such as bombs, flamethrowers and the war staple, rifles.

You keep pushing your team forward until you destroy the entire team’s soldiers and you will win the round. When you aren’t controlling any one team, you can move around the field by moving your finger, so you can command teams in the front or back to move on.

Audio
The audio in this app fits the chaos of war perfectly. It’s militant and fun sounding, and even after hours of play you should still like it without getting annoyed. 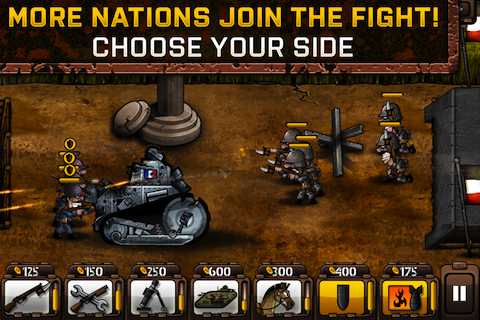 Graphics
It certainly doesn’t look realistic, but the graphics here are fun and they work with the game’s overall feel. They’re not too serious, but neither is the app.

Multiplayer
Not only can you destroy computer-controlled countries, but you can attack people online or over WiFi. This adds a new level of difficulty to the app that single-player can’t imitate. The connection is usually good and there are rarely any lags to keep you from playing.

Overall
Trenches II is a fun app that you will like playing for hours. It’s easy to get started and to keep going, and this app can keep you busy with all the new upgrades and challenging new maps. Once you make your first tank and decimate the field, you will be hooked.