Yeti Town is an interesting puzzle app from 6waves Lolapps, which is available for free on the iPhone or the iPod touch. This is the first iOS app from 6waves Lolapps, who have already prevailed as a successful developer of Social games. I personally downloaded it as an iPhone app on my iPhone 3GS for this review. The basic gist of the game is to upgrade your town as much as possible by combining the saplings, trees, tents, etc all in sets of three. While you’re doing that, you’ve also got to make sure that you have enough space to keep building, while also trapping any yetis that show up and turning them into ice cubes.

Yeti Town’s controls are as simple as possible, and all based solely on common sense, so there’s no problem at all there. The only thing that even presents the slightest bit of annoyance is that, at times, you might accidentally click on the wrong object or the wrong square. Though even that very rarely ever happened to me. 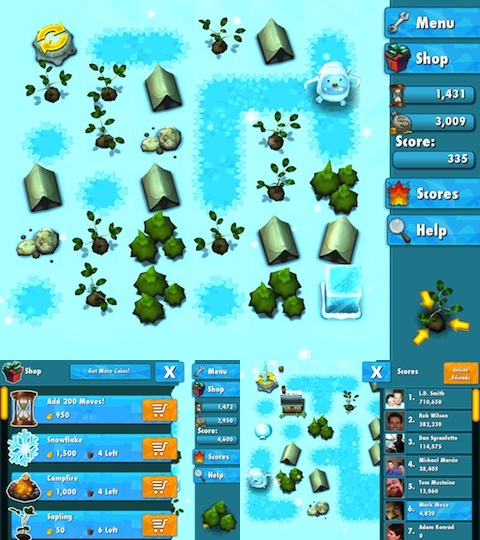 The audio is bouncy and light, which definitely fits the style of the entire piece. It does, after awhile, get a little bit repetitive as it’s the same clip of music being utilized over and over again as you play through each level. Eventually I had to turn the sound off because the constant replay was starting to give me a headache.

The graphics on the game are quite nice, providing a good mix between speed and quality without ever having to really sacrifice either one of them.

At one point the app did crash altogether and just exited back to the home screen of my phone. This was a bit annoying, though it didn’t seem to matter much in the long run, as Yeti Town had already auto-saved my current village without any sort of prompt, allowing me to get right back into the action once I re-entered the application.

There is also the option to connect the app to your Facebook in order to compare your high scores with those of your friends. This is a great addition to the app if you’re one of those gamers who loves to show off. 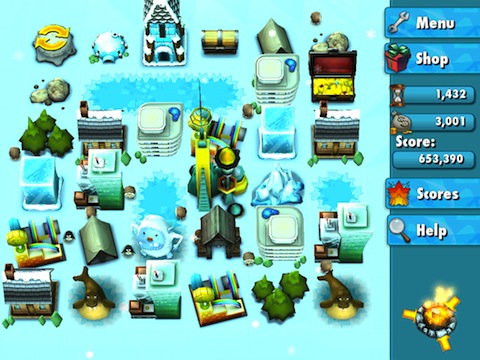 Addicting doesn’t even begin to describe this killer little app. I went into this thinking that I wasn’t going to like it, and that I was going to absolutely dread writing up a review for it. However, immediately after opening the app I was drawn in and, before I knew it, I’d forgotten everything that I was doing before I’d started playing. Therefor, simply calling it “addicting” or “fun” would indeed be the understatement of the century.

Overall, I’d say that this app is definitely one of the greater puzzle games that I’ve encountered recently. It’s a great time waster and is insanely fun.