Looking for an Angry Birds spoof? Misunderstood Pigs is a new iOS game available on the App Store for iPhone iPod touch and iPad . Misunderstood Pigs itself can be describes as an engaging puzzler whose objective is to save the pigs. The game takes Angry Birds and flips it. Now, you have to save the pigs on the playing field from birds being hurled at them from somewhere off the screen.

The app is available as a free download, where users can play eight levels in what is called World One. This gives you plenty of opportunities to experience the application and get a feel for it. Three additional levels can be unlocked for a $2.99 in app-purchase or you can remove the ads for a $0.99 fee. 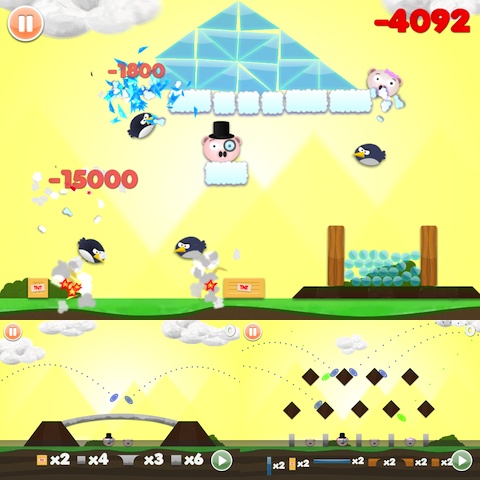 The levels in Misunderstood Pigs are challenging and interesting. Pigs are placed on the playing field with a variety of surrounding blocks, above, and below them. You’re given materials such as wood, glass, and steel in various shapes and sizes. These items are to be used to protect the pigs from the incoming birds.

On the playing field, the trajectory of the birds is well designated which helps in determining where to place materials for best chance of protecting the pigs. Once ready, push the play button. Then the birds are then shot towards the barricades and cause damage. Once a shot a complete, points are assessed for all undamaged pieces and pigs. Often it’s un-necessary to save all the pigs to complete a level.

Controls
Played on the iPad, the pieces the you have available are somewhat small and hard to maneuvering Misunderstood Pigs. They must be dragged with a finger and can sometimes hardly be seen underneath. This makes placement on the playing field somewhat difficult; as they do not snap into place anywhere and can end up being positioned in such a way that they can move when play is activated.

The Play and Pause buttons are easy to use and placed outside of the playable area. Pressing Pause opens up a graphical menu of options including returning to the level menu, resetting the level, or continuing the current level.

Audio
There is no background music which seems like an oversight. While at times background music can be annoying, it would have given Misunderstood Pigs a dimension that is noticeably absent here. Furthermore, there is no sound when the birds are shot into the air. The excitement and anticipation of the game would be easily increased with sound effects, perhaps something like the whistling of a bomb being dropped.

Overall, Misunderstood Pigs is a great game that turns the tables on the Angry Birds. If you love pigs and felt bad for them in Angry Birds, you’ll love this clever twist from CodeBrief.