The Tower Defense genre of video games has recently seen a huge surge in popularity, primarily due to their pick-up-and-play synergy with iOS platforms. Area 51 Defense is a new iPhone title from AMT Games that follows the same rules governing most other Tower Defense titles, in that the gameplay is fast, addictive and can be satisfying in both 2 minute or 2 hour increments. But does that mean that Area 51 Defense is a good enough iOS app to warrant a purchase? Let’s take a closer look at the application’s graphics, controls, content and overall value. 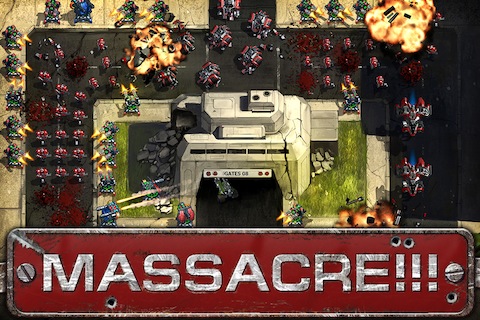 Graphics
The first thing that stands out about Area 51 Defense is its superb graphics, especially for an iPhone app. For a fast paced shooter with a ton going on in the screen at any given time, the engine does not lag, the colors pop and explosions rock the screen with intense clarity. The level of detail in the textures of each tank model is amazing, as each model has different engine jet flares, tread texture patterns, and even decals painted onto the side of them. Alien ships look decidedly alien, all while shooting brilliantly bright and deadly lasers. A select few environments are also destructible, a big plus for an iPod touch app.

Controls
The one area a Tower Defense title needs to be impeccable in is its control. With fast paced alien ships, rockets and lasers pounding your fragile tower around the clock, your trigger finger needs to be accurate every time. Of course, this is my biggest gripe with Area 51 Defense. While it is difficult for any touch screen to be 100% accurate with a fast paced touch-based game, most games are actually more sensitive to the touch than Area 51 Defense. I lost several close missions simply due to a misread “click” or button press. Whether these are problems with my specific older iPhone model, or the title itself I am unsure, but Area 51 Defense claims to be 100% compatible with all platforms so I am disappointed in the spotty control I experienced. 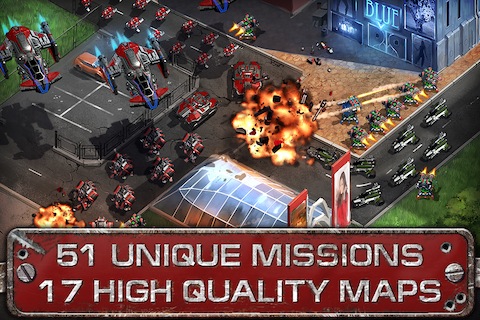 Content
The actual meat-and-potatoes content of the application is very satisfying. Area 51 Defense features 51 unique campaign missions, alongside extra combat scenarios. Each campaign mission plays slightly differently from the past, with some missions presenting slow moving but powerful enemies while other missions have teleporters, flamethrowers, and other goodies mixed in for fun. Either way, the campaign is always interesting, and probably contains about 8 hours of continuous gameplay inside of it. Of course, there are also interesting and fun upgrades for your tower defense, including heat seekers, multi shots, and reflective shields. The upgrades are all well done graphically and great fun to use, even on an iPod touch screen. If you own an iPad, take a look at the same title for the tablet screen called Area 51 Defense HD ($0.99) which is sold separately (not universal).

Overall Value
Area 51 Defense is a great application, if you like quick gameplay and can deal with some spotty controls. The iPhone app has amazingly pretty graphics, and good enough sound and content to hold a fan’s attention for several hours at the least.