Toca Doctor is a highly stylized, family friendly “educational” iPhone game based entirely around the human body. Made by well-known family iPhone app developer Toca Baca, Toca Doctor starts off through the eyes of a young boy in a doctor’s office, making it accessible to both children and adults. Toca Doctor features 18 different mini-games, all themed, albeit loosely, around the medical profession. But is Toca Doctor worth a purchase? Let’s take a closer review at the graphics, controls, content and value of the app. For the record, I played Toca Doctor on my iPhone 4. 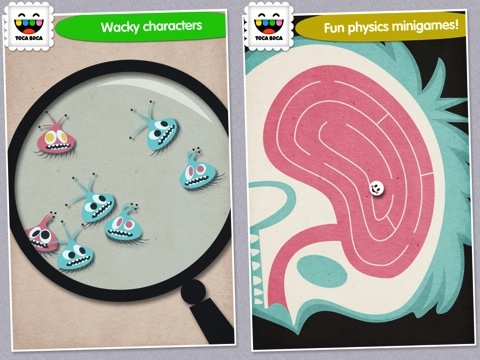 Graphics and Sound
Toca Doctor is thankfully not very photo-realistic, considering all of the human orifice spelunking that goes on in the title. Instead, the Toca Baca team decided to continue using its highly-stylized pseudo-cell shaded graphics to convey its advanced booger picking mechanisms. Seriously though, the graphics in Toca Doctor are bright, cheery and very friendly for young kids and adults alike.

The sound quality in Toca Doctor is not very good, but the sound effects are sometimes funny, sometimes overly gross. Either way, kids and teens will probably love the bright effects, while adults, much like myself, will probably dislike the annoying soundtrack.

Controls
Toca Doctor is accessible as an iPhone and an iPod touch app, so the controls are mainly done by touch screen. If Toca Doctor were a more challenging game, the spotty touch-detection would be an incredibly frustrating feature, but being as the application is very forgiving, its not much of an issue. Don’t be surprised if your medical touch accidentally shocks a patient, without you even moving your finger. Still, the controls are perfectly passable for an iPhone app, especially one developed with children in mind. 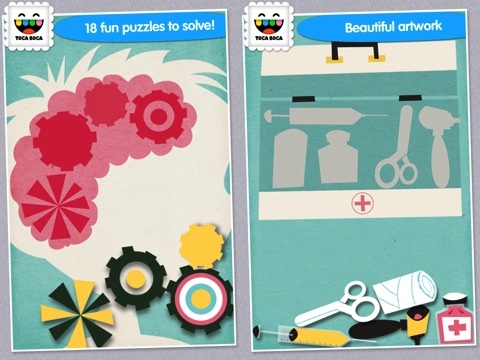 Content
Here is where Toca Doctor gets interesting. Each mini-game revolves around a different medical operation or terminology, ranging from wound bandaging to open surgery and stitching practice. Each operation is presented in a very educational format, such as playing a virtual “Operation” where you have to place each internal organ into their correct space in the body, or even zap different harmful bacteria in a patient’s mouth.

The best puzzles involve the mazes inside of the brain, where each important section of the lobes are filled with interesting obstacles to pass through. All along the way, the bright graphics and sound effects all add up to a slightly trippy, probably high school-level educational experience of our neural pathways. The most interesting puzzle is one where you are required to successfully and safely pull out a splinter from a finger. While it seems simple, it can actually be a great learning experience for field medicine for little kids, as splinters are everywhere when you are young.

Overall
To be honest, Toca Doctor is not meant to be enjoyed by anyone above the age of 12, but for those who skipped out on their 7th period Biology or Anatomy classes, it can still be fun and educational.