There’s no shortage of driving/survival games for the iPhone and iPod Touch, and Police Chase Smash is yet another entry in the genre. However, Police Chase Smash is a free iPhone app and also now finds itself in the App Store’s Top 100 free apps, so it is safe to say this game has clearly got some momentum behind it.

The premise of the title is simple enough. There’s no real story to speak of, you’re just thrust into a police car driving down a two-lane highway. There are four cities that you can play in, with one being free (Florida) and the others costing $0.99 each. Pick your city, and you start driving down the highway. You can switch lanes by tapping the lane or swiping. The goal is to find the cars of criminals, which are marked with a red arrow, and ram into them. When there is no one for you to pursue, you simply evade civilian traffic and collect coins that are in the streets. 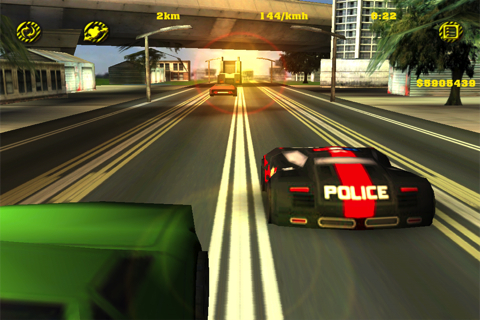 While Police Chase Smash is fun and features gameplay that can easily be characterized as addictive, the truth is that it stumbles in too many areas to really suck the user in. Too many times I would find myself getting immersed in the action, only to have the game not register one of my swipes and end up crashing into the car in front of me. The lack of responsiveness for the controls is really disappointing. I was playing on an iPhone 4, but I don’t think the limitations of the device were the reason for the control issues. There is also a heavy amount of draw-in on the scenery, which is just as puzzling as the poor controls when you consider that the graphics aren’t very detailed at all. More than anything, Police Chase Smash seems to be a quickly programmed application that needs more testing and fine tuning.

There are a number of ways that developer Fun Time Games could improve Police Chase Smash. Fixing the responsiveness should be a key priority. Banner ads are present throughout most parts of the title, and that seems to coincide with a lot of the slowdown. It’s a free title and the developer has to make money somehow, but they do charge for a number of in-app purchases. It seems like they have an in-app purchase to remove the banner ads but we could not locate this option anywhere in the app. There are 10 different police cars that you can upgrade to, although you will need a ton of in game cash, which is almost impossible to accumulate just by playing the game, that is unless you purchase them. If the developer made more of the game available for free or increased the point scale that would allow for a higher rating. As it is now, the title just isn’t living up to what it could be.

I was really excited to review Police Chase Smash, and it has potential to be a great iPhone app. Until that happens, though, it’s hard to give it a higher rating.