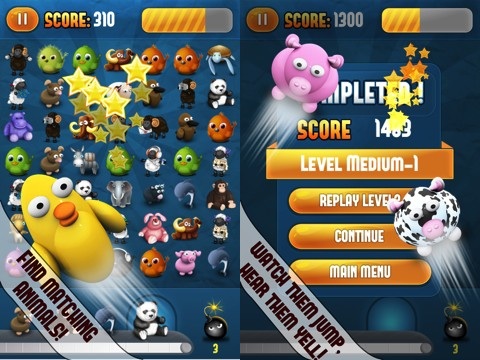 Interface
Find Animals comes with 27 levels: nine easy levels, nine medium levels and nine hard levels. Find Animals progresses in difficulty the more levels you complete. The animals in the grid begin to rotate making it harder to locate the correct animal. New animals are introduced that are the same animal type but in different positions or holding different objects.

On the main menu, there is a button for “Bonus Shoots.” As you play the main puzzles, you unlock weapons in the bonus shoots mini-game. In the bonus shoots, you shoot the animal picture on the “Wanted” poster. You play until you run out of time. There are various weapons including a rock, knife, laser gun and bomb.

Graphics, Audio and Controls
The graphics display well on a retina display. The animals are designed with just enough subtle differences to make the application difficult. Find Animals uses background music while you play. It also uses sound effects when you hit the correct animal. Controls for the main Find Animals puzzles involve simple tapping of your finger on the correct animal. The bonus shoots require you pull back on the sling shot to shoot the rock or tap the laser to shoot the animal. 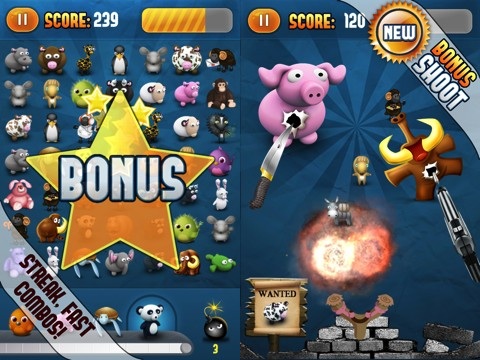 Overall
Find Animals is free to download from the iTunes App Store for your iPhone or iPod touch. It is ad-supported and shows full-page ads between games you must click the “X” to exit. Clicking a few of the buttons such as the “Rankings” button resulted in an error message that it could not complete the requested task.