Rune Raiders, developed by Retro64 and available on the iPhone, iPad, and iPod touch, can best be described as a strategy role-playing game. After choosing six of the available twelve characters, the action unfolds on a grid ranging from six squares across to nine or ten squares tall. As you move vertically through the grid, you must battle many enemies ultimately culminating in a boss fight.

Where Rune Raiders puts the strategy in strategy role-playing game is in the positioning of your heroes against the enemies. Each hero has a specific attack pattern, as does each enemy; placing your hero in a position where he can hit the enemy, but not get hit, is the key to winning. With each enemy you kill, you can earn perks, which will give a hero new abilities, or gold, which are used to purchase new abilities for your heroes. The control for the app is responsive, works well and is easy to grasp, allowing new players to jump into the action quickly. 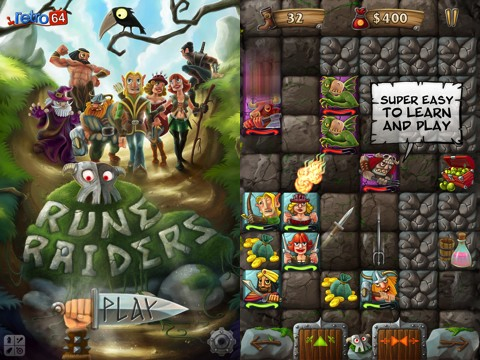 However, where Rune Raiders falls short is in its length. Eventually, it is possible to level up your heroes to the point where the application becomes too easy; your heroes will have no problem defeating anything in their path and the 15 included missions are over before you know it. While the application does include a survival mode, it isn’t enough to encourage long term replay value. However, Retro64 has claimed that new levels, monsters and heroes will be included with each free update, which should bolster reuse. 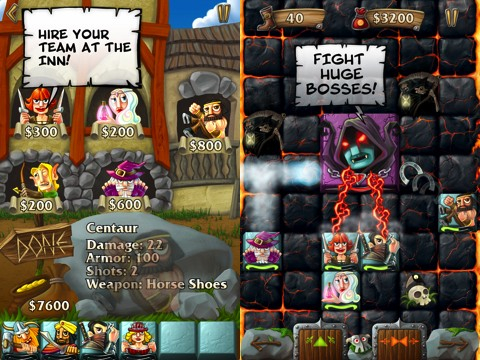 The graphics are simple but effective; heroes and enemies are displayed as static tiles on the grid, sliding on the grid when you move them. However, Retro64 has made each hero and monster exude personality due to the stylized portraits used for each character. The animation that accompanies a character’s attacks are well-animated, colorful and make the battlefield come to life. Usually, simple graphics work against an iPhone app; however, Retro64 has chosen a simple art style and made it their own, making Rune Raiders a visually unique app that stands out in a crowded genre. Sadly, the same cannot be said for the music or sound effects, which don’t stand out and sound average at best.

This review was performed on an iPhone 4 with iOS version 5.1 software and featured one crash; however, the bug that led to the crash has since been patched and Rune Raiders has not crashed since.

Rune Raiders aims more for the casual gamer; for hardcore strategy fans, consider 100 Rogues as a pretty good alternative strategy iPhone game. For everyone else, Rune Raider is a decent, if not short, entrance to the world of strategy role-playing games.