Abrawordabra is not at all like any word game you’ve played before. This iPhone app developed by Total Arkade Software combines elements of traditional word games with elements of action games. When I played it on the iPhone 4, I found a few kinks that still needed to be worked out, but it’s overall an enjoyable and surprisingly beautiful gaming experience.

When I opened the application to review it, I found a richly detailed menu screen showing the backstage area of a magic show. The general feeling is rather theatrical, with curtains opening and closing on each level and an evil magician making an occasional appearance. There’s an easy-to-find “play” button on the menu screen which takes you to the four different modes: Mizz Spell, U Genius, Fill the Gap, and Float On. 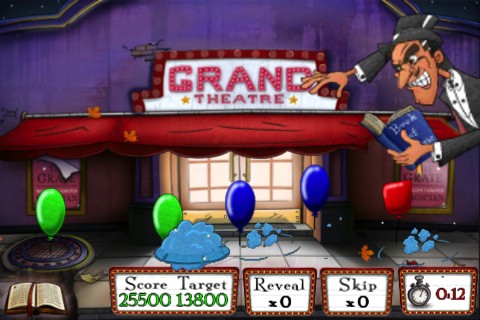 Selecting any of these modes will take you to a tutorial and then on to the first level. I found the tutorial to be helpful, since the game’s controls were easy to learn but not intuitive, but I did have one complaint. The application modes are all quite similar, using the same controls and almost the same layout, so it was annoying to have to re-do the tutorial for each mode. An option to skip the tutorials would be helpful.

In each mode, the player maneuvers letter tiles through a maze by swiping holes in the floor, stacking the tiles, and tapping various powerups to gain points. At the end of the maze, the letters become available for use in the word-oriented part of the level. The letters must be floated to the top of the screen to correct words in Mizz Spell, to create new words from scratch in U Genius, and to fill in missing letters in Fill the Gap. The only mode I found lacking was Float On. It was fun, but felt more like an afterthought from the designers than a fully developed mode like the other three. 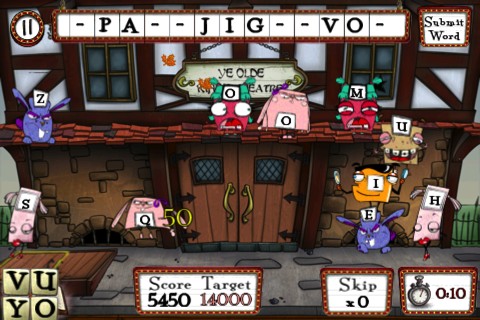 From the letter tiles to the menu screens, it seems as if everything has been carefully illustrated and thoughtfully animated. The vintage feeling of the graphics worked well, and the music was carefully chosen. The only thing I found myself wishing for was a greater challenge from Abrawordabra. I’m still working my way through the levels so I may get my wish soon, but I felt that while the mazes could get difficult, the words never posed a challenge to me.

Still, I’d recommend Abrawordabra – the developer, Total Arkade Software, has put out a free trial version with a few levels for those who want to try before they buy, and it’s available for the iPhone and iPod touch. This is a lovely little app and a fun gaming experience that should only improve with time.