Universal Movie Tycoon, developed by Fuse Powered Inc. and available on both the iPhone and iPod touch, is very similar to other city building games such as the classic SimCity. What makes Universal Movie Tycoon different is that, rather than develop a city, you are developing a movie studio. From a humble beginning with only one movie set and a script for Uncle Buck, your goal is to create a sprawling movie juggernaut in the vein of Universal Studios.

Gameplay is simple; select the type of movie set you want to build, select a director and an actor and, once the movie is completed, you reap the rewards in terms of experience and coins. You are also in charge of decorating the studio and building new sets all from a touch based interface. For the most part, the game controls well; however, when it comes to precision controls used to place small items, such as a bed of flowers, the controls start to falter a bit as it becomes difficult to pinpoint the exact location to place your item. 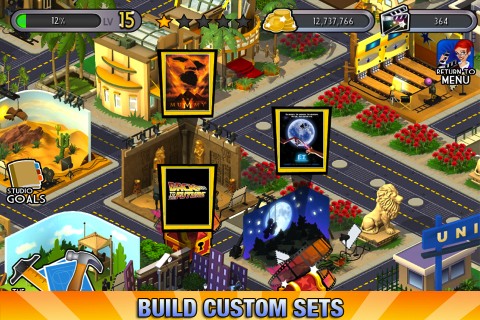 There are two types of currency available in Universal Movie Tycoon: coins and Movie Magic. Coins are used to hire directors and actors and build a small number of sets and decorations. The second currency, Movie Magic, is where the game starts to fall apart. Movie Magic is used to build most of the sets you will need and speed up development of a movie or construction project; with some movies and projects taking 24 hours in real time to build, Movie Magic is invaluable. You are given 80 Movie Magic at the beginning of the app and, with a tutorial that actively encourages you to use your Movie Magic, you are quickly left with zero. Very early on, Movie Magic is required to buy certain items to make progress; the only way to gain more Movie Magic is to buy it or watch many advertisements. This iPhone app quickly becomes a money sink or a portal to advertisements, both of which are no fun. 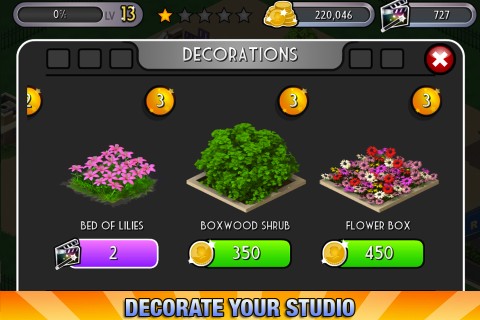 The graphics and music are modeled in a cartoon fashion and give Universal Movie Tycoon a unique charm. However, the app does feature several misspellings in the text, which were surprising to see. Unfortunately, Universal Movie Tycoon is also not stable; over the course of this review on an iPhone 4 with version 5.1 software, this application crashed three times. 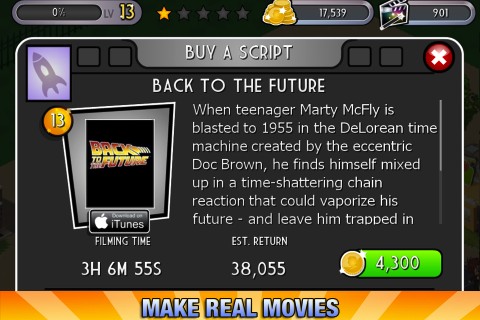