Quell means to stop, put an end to, or to calm. Slide the raindrop in four directions to collect pearls but be careful of traps, endless loops, and spikes. This app by Fallen Tree Games requires iOS 3.1.3 or later for the iPhone, iPod Touch, and the iPad. For the most part, Quell creates a calm and peaceful atmosphere but can be frustrating when you’re stuck on a puzzle. This is a simple, trial and error puzzle game that anyone can play.

Thinking ahead of time and flicking the droplet of water up, down, left, and right are the main ideas of the game. The raindrop cannot change direction once you swipe it until it hits something. Restart is a very important button when you die from hitting a spike, have the glass travel endlessly, or making a mistake in general. 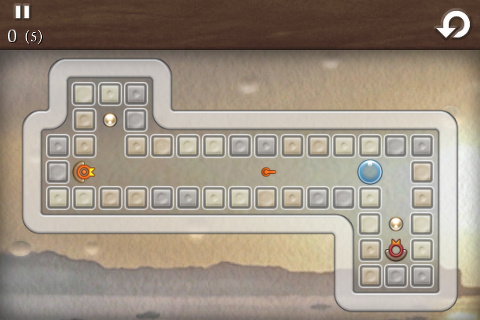 By finishing the puzzle in the least amount of moves (the game will show the least amount of moves a level can be completed in under the pause button), you’ll be rewarded a coin. Coins are used to buy hints which can be found when the game is paused. Bought hints will show you how to complete the level perfectly (using a hint without completing it first or on a beaten level will grant you the coin). Depending on how difficult the level is, it might cost one to four hint coins. Play a level a couple of times before using your precious coins. Be aware of obstacles such as gates which closes when the droplet passes through, blocks with either the male or female symbol which disappear when they touch each other, rings that moves the glass in the same direction but from another ring, and switches that change the direction of certain spikes. Quell is a straightforward puzzle game featuring helpful tutorial levels and achievements that can be viewed in game. 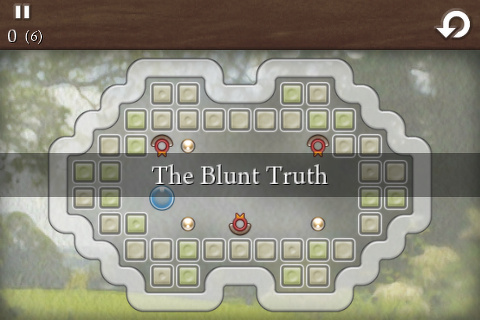 The graphics for Quell are clean and simple. A year has three stages, each stage has four levels and each level shows a quarter of the stage. The stages look like paintings and are framed on a window. The “paintings” are grainy (don’t know if this is an art style or an effect of the rain or mist), they depict rain running down on the window in the background, and shows nature in the three or four seasons. The puzzles themselves show polished and sharp images. Overall, the graphics are subtle and impressive.

The music is strangely soothing and calming, it fits the game very well. The sound effects are ping or a ding when the raindrop hits a pearl and getting all of them will make a louder and special ring. The audio might be boring after a while but I think they fit the game perfectly. The music reminds me of songs I used to listen to and are rarely found nowadays. I enjoy the audio’s addition to the atmosphere.

Quell sells for $1.99 on the iTunes App Store. There is Quell Reflect for $1.99 which has levels with two raindrops and a new obstacle that requires the raindrop to be a different color in order for it to be removed. There are no in-app purchases or iPod music support at the time of this review. The hints are not automatically activated when bought and can be turned on or off in options. After you beat the game, there isn’t much to do but Quell is still impressive with its detail in graphics, music, and of course atmosphere.