The Simpsons: Tapped Out review

The Simpsons: Tapped out is a new Simpsons city building game by EA Games for iPhone, iPad, and iTouch. The game starts with Homer at the nuclear power plant, too occupied playing a city building game on his myPad to realize that the reactor is melting down. The result is a massive explosion which destroys the entire city. It is now up to you, Homer, and the numerous Simpsons cast you unlock on the way to rebuild Springfield.

Each character and building has specific tasks that can be completed for experience and money. As you unlock more characters they will walk the streets of Springfield, waiting to do your bidding. As you level up you buy more land and build new structures. Players needn’t fret too much about original building placement, as all units can be moved and adjusted at will. Performing various activities gains experience, money, and the occasional donut. Donuts are the game’s powerup, they can be used to quickly complete tasks and purchase special buildings and objects. Players can use real money to buy in-game money or donuts to help speed along their Springfield’s development. Your city is rated in a range of different categories, and the higher the rating the more bonuses you gain. Decorations like trees and fences are available to add flair to your town, also giving small bonuses to your rate of growth. 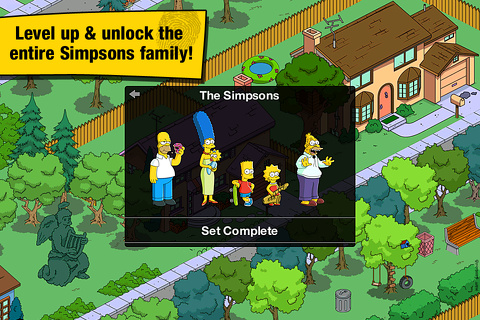 There are no shortages of Simpsons quotes and references, and the character dialogues are written in a consistent manner to the personalities of the show. Many of the greatest moments and episodes make appearances in the game. Favorite characters are unlocked as you progress, and users can construct a range of buildings from Springfield staples like Moe’s Tavern to more obscure structures like Hank Scorpio’s Volcano Lair.

Early on, Professor Frink jumps in to quickly fill you in on the existence of parallel dimensions of the Simpsons universe which can be visited. In other words: you can drop in on your friends’ games. This clever feature of the game brings further opportunities for debauchery, points, and experience, not only can you berate or admire your friends’ Springfields, but you can actually vandalize their property and gain bonus experience. There are also seasonal events like Halloween Trick-or-treating and zombie infestations. 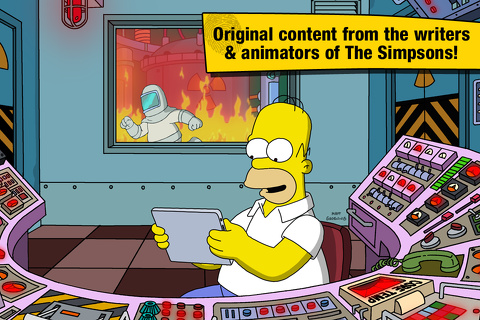 By far the biggest complaint is needing to reload the game whenever absolutely anything happens on your phone, with the load time being a bit on the long side. This is particularly frustrating during an update as the update will then restart from the beginning. Device autolocks? Update restarts. Low battery warning? Update restarts. Receive a call? update restarts. Other than this annoyance The Simpsons: Tapped Out really is fantastic, especially for a free game. It does not just pander to fans, it is a well designed game with depth and great features. Any Simpsons fan is guaranteed to enjoy the game, and even someone who has somehow never seen an episode would have a great time rebuilding Springfield.