iFighter is a top-down airplane shooter game based in World War II. You control a fighter jet and you fight dozens of enemies, dodge bullets, and destroy secret Nazi war machines that will push reality into a hole and bury it. Released by EpicForce, iFighter 1945 is available on the iPhone, iPod touch, and iPad for $0.99 and has a Lite alternative. This app will also soon be Plus+ integrated.

iFighter presents itself amazingly well. To begin with, the game has one of the most useful options for a gaming app I have ever seen. It gives you 4 different control settings: Motion, where you tilt your iDevice to control your plane; Touch, wherever you touch is where the plane will go; Relative, where you touch somewhere on the screen and you can control the plane from that area, allowing you to be able to see more of the level and more of your plane; and Joypad, which gives you a handy on-screen controller to control your plane. My personal favorite is the Relative controls, but the fact that the game gives you 4 very useful and very different controls schemes just makes me wish that all my apps could do that. 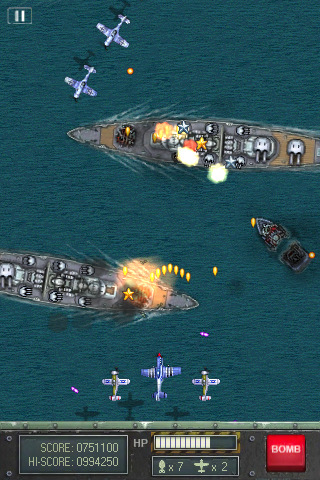 Currently there are 4 missions (with 2 promised in the next update) and each one of them look amazing. The character sprites are crisp and clean with tons of details, the cities look amazing, and the explosions, clouds, and other smaller details look realistic and eye catching. Powerups come often enough to really amp up the combat and it all throws me back to the old days of when I spent hours at an Arcade playing 1942 and Raiden… come to think of it, this game really reminds me of a less sadistic Espgaluda II. 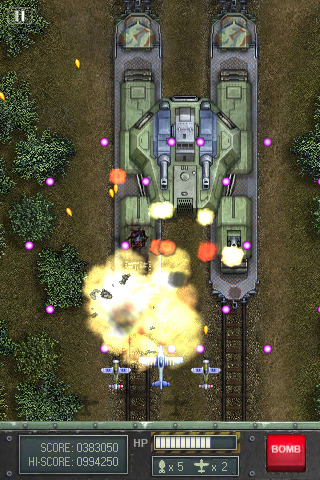 Each level has its own soundtrack, which is a really nice touch and it combines with the graphics for a truly well done presentation. My only issue with the game is that I wish that it would handle collusion detection for my plane to be the same as in Espgaluda, where you have a single point that is the main weak spot. My plane is big, wide, and an easy target for the many MANY projectiles being thrown around at me. Granted, this isn’t a maniac shooter, so the bullets don’t look like a traffic jam in LA, but it would help if the wings of my plane didn’t clip into the fire so often… maybe it’s just my mind adjusting to bullet hell though, so consider this a minor suggestion.

Overall, I had a good time with iFighter 1945. Great options for controls, great graphics and sound, and really well designed intensely epic boss battles. Give this one a go, or try out the Lite version for a quick demo round.