I can’t decide if Simply Noise is real or a gimmick. Even now as I sit here typing, the pink noise streaming from my iPod seems a lot more irritating than stress reducing. Reactor LLC, the company that created this application for the iPhone, iPod Touch, and iPad boast that its technology blocks distractions, enhances privacy, aids sleep, and melts away stress, but I’m not buying it. Perhaps if this kind of noise were playing from a fancy sound system where it didn’t just sound like static, I’d be more convinced about it’s beneficial properties, but coming from the small speakers of an Apple device is another story.

The app comes with three noise options to choose from: white, pink and brown. It was aptly named too, considering all it is is noise. Not pleasant noise, not soothing noise, not even ambient noise; it is SIMPLY noise. That said, if I had to choose which color I liked best, I’d have to go with brown. Unlike white noise, which is higher pitched and much more adjacent to the loud static you hear on a TV when the cable’s not plugged in, brown noise is almost soothing. Would I play it during dinner? No. Would I play it while I studied for an exam? Definitely not. Least likely of all would be a scenario where someone listened to this during a hot bath or massage. However, among the three noise colors this app offers, brown is the least abrasive. Pink noise sounds a bit like a loud river in the mountains and makes me want to white water raft through it’s frequency. White noise is just all around offensive and not a friend to the ear drums. 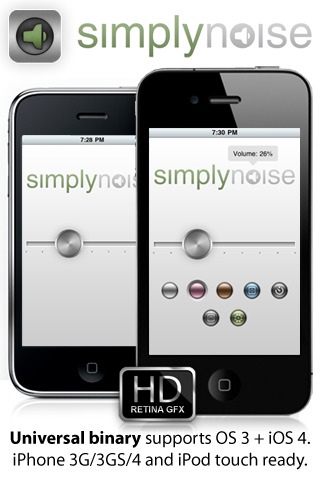 There are some convenient aspects to this application, however. The creators were kind enough to include a timer on the app, presumably because they think people will actually listen to this stuff while they fall asleep. I hate to break it to them, but these noises would work better in a noise band than as a remedy to insomnia. It must be said that they do resemble the ocean in some ways, so if you’re an admirer of the great sea you might actually like what you hear. I had a CD of waves crashing in Big Sur once and despite many attempts to appreciate the recordings, they just annoyed me and hurt my ears. Nothing has changed between then and now, and this application does little more than bring back memories of sleepless nights when I’d listen to that CD trying to get my money’s worth. At 0.99 cents I don’t think Simply Noise provides the same kind of incentive to destroy your ear drums. Then again, this stuff might actually work and I’m just a terrible skeptic. I’ve been listening to brown noise throughout the entirety of writing this and I guess my shoulders became more relaxed than they were before. Too bad I just got a really annoying phone call that tensed me up again. Now I have to listen to ten more minutes of this detritus.