How to put the Newsstand iPhone app in a folder and hide it (not iOS 5.1)

Update: Unfortunately as of iOS 5.1 this trick no longer works as Apple has patched the workaround. So if you’re still irritated by that Newsstand icon and not using the app on your iPhone or iPad, and want it gone, you can do a couple of things:

1st – Tell Apple how you feel about the app, and maybe they will listen and let users hide it via Settings. There is a feedback link here http://www.apple.com/feedback/iphone.html

2nd – If you have a jailbroken iPhone with Cydia installed, you can actually hide the Newsstand app icon using a free tweak called NoNewsIsGoodNews. Look for it in the BigBoss repository.

The original Newsstand trick is still listed below for those using iOS 5.01 and lower.

Newsstand is the new iPhone and iPad app that ships standard with iOS 5 and gives you the ability to subscribe to newspapers and read them on your iOS device. For many iPhone users, the Newsstand app is not very useful and for some users it goes completely unused.

Newsstand’s app icon not only looks like a folder, it also behaves like a folder. This means you can’t put the Newsstand app into a folder on your iOS device. You also can’t remove the app from your device, which can be annoying. 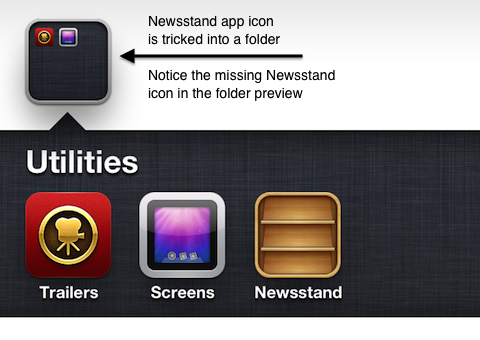 Here’s the good news. You can actually use a trick to put the Newsstand app in a folder and semi-hide it out of the way. It is pretty simple and anyone can do it as long as you’re quick on the draw. Here’s how:

It may take a couple of attempts, but if you time it right, Newsstand will be moved into your new folder along with the other 2 apps. You will now be able to add other apps to that folder.

Note: This trick is for people who don’t want to use the Newsstand app at all. If you do try to use the app while it is in a folder, the iOS Home Screen (SpringBoard) will crash and reboot. You can pull Newsstand out of the folder if you ever want to use it.

There is only one drawback to this Newsstand hack. The preview of the newly created folder will not display an icon for the Newsstand app it contains. You can eliminate having an empty icon block in the middle by placing the Newsstand app all the way on the bottom of the new folder. After you sync your device with iTunes the Newsstand trick might get reset, in which case you can apply the same trick again.

15 Comments to “How to put the Newsstand iPhone app in a folder and hide it (not iOS 5.1)”