Wanna find speed traps in your town? The Trapster iPhone app uses community generated content aimed at informing users where police have setup speed traps around your current location. After you sign up for an account and log in, Trapster shows you local traps and police hiding locations on a map called a Trap Map. Trapster also indicates reported live police locations and known traffic light camera locations.

As a user , you can also report traps you know of or have come across to the Trapster site. Overall a pretty interesting idea and great use of the location based services on your iPhone, and it might even save you some headache. Obviously, you should never use your iPhone while driving. 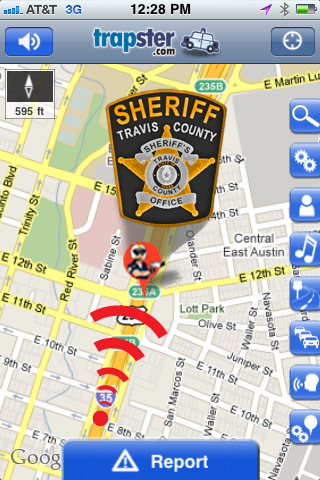 Update: Senators previously lobbied Apple, RIM, and Google to remove DUI-avoidance apps back in March 2011. RIM has complied, Google has refused and today Apple has also commit to making a change. On Wednesday, Jun 9th 2011, Apple has stated that they will start to deny new iPhone applications to the App Store, such as Trapster that help alert drivers of drunk driving checkpoints. This decision comes as a result of arm-twisting from U.S. Senators to keep DUI checkpoints remain anonymous. Apple will now probably send out notices to existing app developers and request the remove these DUI tip-off features from the apps. Look for an update to Trapster in the coming days that will most probably yank the checkpoint feature from the app. Reach Unlimited Corporation, the makers of Trapster also develop the app for Andorid, BlackBerry and other smartphones.

Here is a video demo of Trapster for iPhone