Hulu Plus for iPad review

Since it was introduced a couple of years ago, Hulu has proven to be an Internet phenomenon. Starting out showcasing NBC network shows, it has continued to grow by adding shows from other big networks such as ABC and Fox. As Internet access speeds continue to increase and ultra broadband Internet becomes more accessible and affordable than ever, users are demanding more on-demand content through services such as Hulu and Netflix.

Furthermore, smart mobile devices such as iPads and iPhones continue to be adopted at record breaking rates causing the demand for media not only to be accessible on an as needed basis but to also be mobile. Thankfully, Hulu is on the leading edge of technology and has created such an app to bridge these needs of the fast paced, technology-loving users.

The Hulu Plus iPad app streams Hulu’s long awaited premium service wherever you are with access to the Internet. The download is free and gives you a very small subset of free content. As of this writing, to view the premium content, you not only need to pay $9.95 per month but you also have to acquire a special invitation to beta test the service.

The app brings most of the functionality you would expect to find on the Hulu website as far as controls are concerned. It has an easy-to-navigate interface that is fast and responsive. It is laid out just like the website and it will be familiar to frequent users Additionally, if you are on a fast connection, you’ll be quite pleased at how quick you can start watching content. 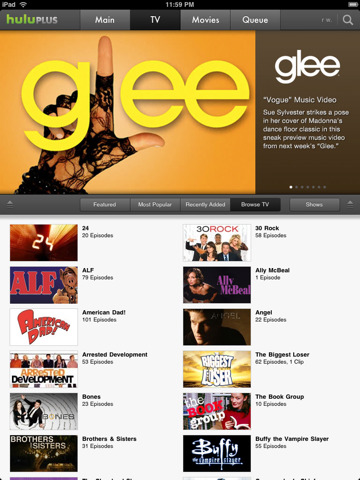 One downside to the Hulu iPad is that even though you pay the $10 a month, you still get advertisements on the content. I suppose this is true for cable as well.

A benefit that you gain with Hulu plus is that with many shows, you are able to watch a much larger set of their episodes compared to what is available on hulu.com. For instance, you can watch every episode of all the seasons for both LOST and The Office (including the UK version).

A couple of other things that were kind of frustrating whilst using the app is in order to add a video to your queue of things to watch, you have to tap and hold each video thumbnail and wait for the menu then choose to add it to your queue. This becomes rather tedious when going through a list of content choices and add many items at a time. I would much prefer a button to quickly add it that is always available. 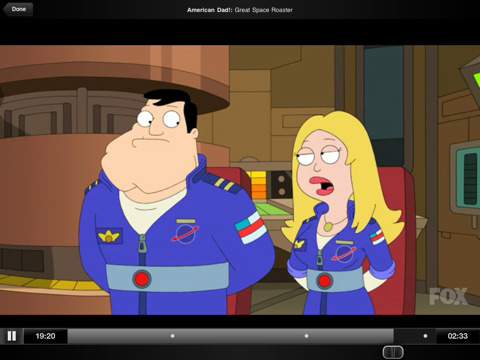 Another frustration is if you are watching a video and for whatever reason you need to lock the screen either manually or by pausing and having your iPad go into lock mode, when you unlock the screen, you do not immediately start where you left off—no, instead you have to watch a commercial segment first before you can continue watching.

The search functionality is decent and very quick. Where it lacks is displaying the results. For instance, searching for ‘The Office’ you simply get a grid listing of all the episodes that match that term. They are not grouped in any fashion such as by show, genre, season, network, etc. For this kind of filtering you have to go to browse for content.

Hulu Plus for iPad is still in beta so I’m hoping that these rounds of testing they conduct are fruitful and provide a bit better experience for the user. Additionally, it would be nice to have a more consistent offering of shows to the premium users; if all episodes of LOST are going to be available, I would expect other shows on that network to have the same offering. This app is a worthy download to try especially if you watch a lot of TV and would like to have access to many shows.