TV programming distribution has changed yet again. No more having to plop in front of a TV to watch TV. To start things off, HBO GO is a first of its kind app for all iPhone and iPad users. If you’re currently paying your cable or satellite provider for HBO, you can now watch on-demand HBO programming using the HBO GO app anytime. Consider HBO GO a “free gift with purchase” to you from HBO. Stream all your favorite HBO series like Curb Your Enthusiasm, True Blood, Entourage, Hung, Real Time with Bill Maher, The Ricky Gervais Show, Sopranos, and many more. You can also watch HBO Sports originals, Documentaries, Comedy, Late Night, and finally Movies. HBO GO is really an awesome service and it will probably give you yet another reason not to cancel your HBO programming, ever. Now if I could just pay for the HBO app monthly and cancel my home cable programming, that would be nirvana. 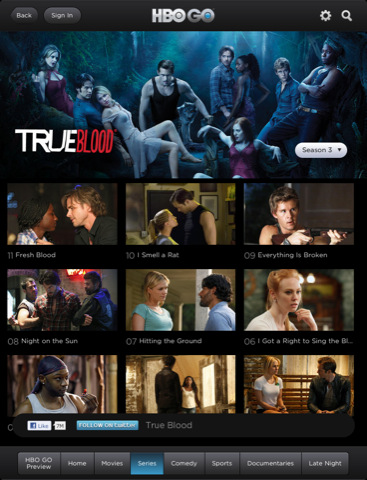 Yes, there are over 1,400 shows ready to watch right now. To get going, you just have to enter your account login information for your current provider. The app then authenticates your subscription status and your’e ready to start watching. Right now the app says that it is available from “participating television providers” so some people might face issues. It looks like Time Warner might be unsupported right now.

The Watchlist is where you can save titles you want to watch to a playlist for later viewing. What’s great is that you can do this online at hbogo.com and your Watchlist is automatically synced to your iPad, iPod touch or iPhone when you restart the app. Oh and by the way, this entire HBO GO experience is also available online at http://www.hbogo.com in case you want to try it out there as well. 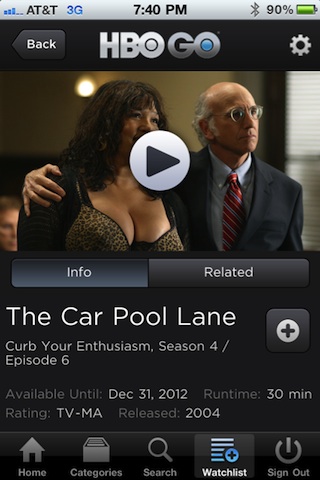 Pause and resume is not apparently a feature as of right now. If you stop a show, the HBO GO app doesn’t gracefully resume to where you left off. This is a minor nuisance, especially when you’re watching a show and want to pick it up later after a phone call or text message. To be fair, you can actually drag the playback slider and jump to anywhere in a show at anytime. It’s also worth mentioning that on an iPad, you won’t have any calls or text coming in. Moreover you’ll enjoy a more fitting user experience in the HBO GO app on the larger iPad screen.

Airplay is supported by the HBO GO app, although when we tried it with the Apple TV, it only output audio. Not sure if this is intentional or just a bug. Hopefully the latter that will be addressed in an update soon.

You can stream over 3G as well, just be careful of data overage charges. To be safe the app gives you a warning each time you try to watch over 3G, but there is a setting where you can disable this, especially if you’re lucky enough to still be on the unlimited data plan. The video quality is better over WiFi. There is a feature in the HOB GO app that drops the stream to audio-only when your 3G speed drops, which unfortunately happens frequently in this app. 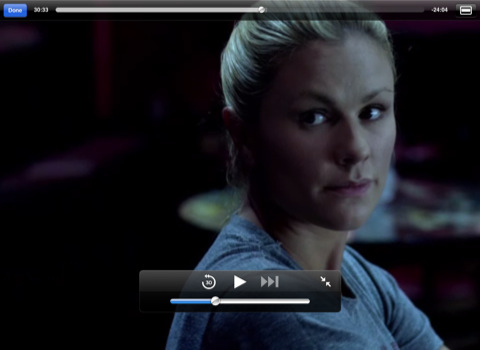 A Series Pass in the app is there as well, which is basically like a Season Pass in TiVo. There is a button on the bottom of shows that are actively running. This button is a bit hidden, so you have to really look for it. Parental controls can be setup if you like.

Overall, HBO GO knocks it out of the park. It’s a free app that gives you HBO On-Demand, really on demand, anywhere you are. Adding resume functionality will really bring the HBO GO app to the caliber of its superiors like the Netflix app.