MAX GO is a new iPad, iPhone, iPod touch app and web service from Cinemax that gives subscribers access to on demand movies and Cinemax series on your iPad. Home Box Office has already released the HBO GO iOS app, and now Cinemax users get the same fabulous treatment. The app asks you to log into your current cable television or satellite company to verify you are paying for the Cinemax package, and then loads the programs page where you can tap to start watching right away. Right now MAX GO supports U-Verse, Verizon, Charter, Cox, DIRECTV, Dish, RCN, Sudden Link, and xfinity. Unfortunately Comcast and Time Warner customers are left out in the cold as of right now. 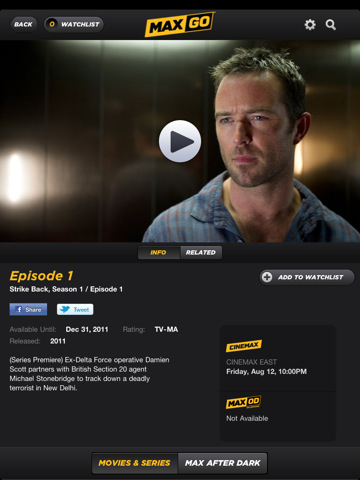 The layout of the MAX GO app is very clean and easy to navigate on both the iPhone and iPad, although things are much more fluid on the iPad screen. Pick from either Movies & Series, or Max Aftr Dark to begin. Movies have a featured section where you can flip through a cover flow style gallery of the top hollywood flicks. Choose A to Z and you can run through all the movies Cinemax on Demand has to offer for your iOS device. For more specifics you can drill into movies by genre.

The MAX GO app has a Watchlist feature where you can keep a shopping cart style list f movies you want to watch later by tapping the “add to watchlist” link. You can access your watch list online as well at the maxgo.com website to quickly create a list of stuff you want to watch later on your iOS device. Your watch list movies are always available using a film strip style drop down on the top of the page. You can easily edit your wishlist and remove stuff you’ve already watched. 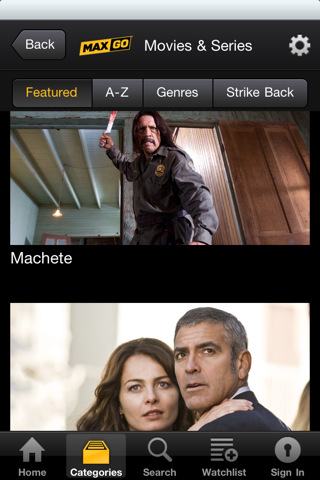 Movies and shows each also have their own full informational page where you can get stats like runtime, release year, rating, plus cast & crew, director, producer, and soundtrack details. From here you can also Facebook share and tweet about the show if you like.

Besides movies and Max original Series, you also get access to Max After Dark shows via the app. You have to option of setting up Parental Controls in the app by entering a PIN to secure access to sexual content.

If you were planning on using MAX GO to watch shows while abroad, note that the MAX GO app and service are restricted to US and certain US territories, and don’t work abroad. The app works over both a 3G connection or WiFi and the quality of the stream is adjusted in the app based on your speed.

The app also talks about an assignable Series Pass which will send new episodes of the new Cinemax original series Strike Back to your Watchlist, although it is not at all clear how you would go about signing up for the Season Pass option in the app.

If you like to watch movies, the MAX GO app is a wonderful addition to your iPhone or iPad. Right now the app is featuring movies like Get him to the greek, Edge of darkness, and Half baked. Overall there are more than 400 movies and shows available at launch day for MAX GO and new content is going to be added each month going forward.