There are many esteemed artists and musicians whose works of art have survived the test of time, and become household names–Frédéric Chopin is one of them. A master of Romantic music, the Polish pianist wrote compositions for piano solos that were (and continue to be) technically demanding but quite expressive and nuanced, if played by the right hands. Some of his most well-known pieces include the Revolutionary Étude (Op. 10, No. 12) and the Minute Waltz (Op. 64, No. 1). 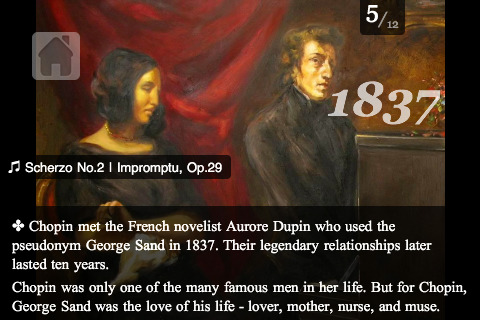 Xibeiliux’s new music app, succinctly titled Chopin, reveals even more about this celebrated musician. The Story tab brings you to a 12-slide overview of his life (although Chopin’s story could be told in much more). Tap to go through the slides and text while enjoying one of his pieces. The Music tab holds the bulk of this app, including a detailed breakdown and analysis of Chopin’s Ballade No. 1 in G minor, Op. 23. As the piece is played, different sections are broken down and explained (earphones for this tab are recommended). Unfortunately, the other two shorter compositions included in this tab aren’t analyzed as deeply; rather, they are probably there to just enjoy. The Album tab includes 20 pictures pertaining to Frédéric Chopin and his life, while all other tabs launch the Safari app.

While I find the contents of this app engaging, I honestly don’t know how many other people would…let’s face it, classical music isn’t exactly all the rage nowadays, and you wouldn’t have to analyze a piece section by section unless you needed to. Aside from interest, the app itself isn’t horribly user-friendly, as there is a noticeable lack of control. For instance, the slideshow and the Ballade analysis–although very informative–don’t include a back button or an option to fast-forward/backward. One suggestion I would make for the compositions under the Music tab: include the sheet music, somehow, especially for the Ballade. It’ll make all the analyzing much easier to see and follow (a good editor would make it even better).

The app is beautifully and tastefully designed, but is also frustratingly glitchy–I’ve had to manually restart my iPod Touch two times already, and it crashes sometimes while I’m listening to the music. An in-app web browser would be great, as half of the tabs lead to Safari, closing the Chopin app for those of us who don’t have multitasking. Potential users might balk at the $4.99 price tag, so I hope updates will include a lot more content than the app currently has.