The makers of OMGuitar clearly don’t take themselves too seriously, as evidenced by their, what one would hope would hope at lest, ironic video advertising their guitar synthesis app. In it, a young lady late for an audition runs in before a stern-face panel before pulling and ipad out of her bag (for reasons never explained to us she’s forgotten her actual guitar) and rocks using only the OMGuitar app and Garbage’s “I’m only happy when it rains (or when I’m watching my boyfriend eat his cornflakes). Stunned, the stern panel of record executives all burst into song and presumably she gets the gig. 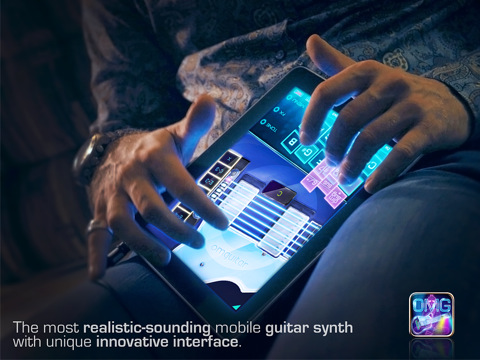 OMGuitar doesn’t replace playing a guitar. It doesn’t even come close. Once you remove that conceit from your head however, it is an incredibly fun and well designed app that brings some of the fun of guitar based music to the iPad. Once I got the hand of the control system and handling, jamming with the app, whilst not quite Surfing with the Alien, was at least as fun as Guitar Hero-type gameplay and on the way to being an actually useful musical tool.

The first thing you have to realise about the app is that you have to sort of position the iPad at a funny angle in your lap. If you don’t play guitar, you can configure the app in an easy to use left-hand based strum pattern (assuming you are of course right-hanedppde). There is also a more natural (for right handed guitarists) strumming pattern you can employ. Once held correctly, you strum (or pluck) with one hand and concentrate on fingering with your free hand.
Rather than having to learn complicated augmented ninth patterns you simply press a button – sorted chromatically on the bottom half of the screen and chords you never knew existed are available to you. 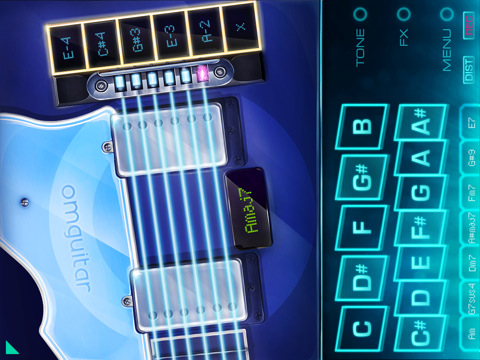 The on board sampled sounds are decent and feature a range of classic sounds – Stratocasters, Tekecasters, Classical and acoustic guitars. There are also FX which you can tweek the levels of.

Record songs. There is a learning curve but worth climbing. Feature app – but in this instance the hype is clearly justifiable.