I resent many things (as a comedian and journalist I work in two of the world’s bitterest professions) but one that comes up quite often in my day-to-day writing is Apple’s appropriation of the word “magical” to describe the iPad. It was jarring when the used it extensively at launch, jarring when it was referenced in their financial statements (Apple has recently introduced its magical iPad which is defining the future of mobile media and computing devices. http://www.apple.com/pr/library/2011/01/18results.html ) and jarring when I find it creeping into my reviews. Why so annoying? Well despite the marketing hyperbole “magical” is at time the *perfect* way to describe the iPad experience. Grooving with the Korg Electribe: Gorillaz edition app on my couch I couldn’t help abstract myself from the situation and think “wow” and almost dropped the M-word. 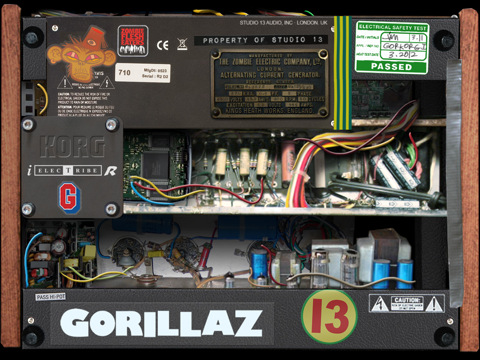 A touchscreen beatbox first and foremost, Korg Electribe: Gorrilaz edition puts a virtual Gorillaz-skinned iElectribe in your hands to tweak to your heart’s content. Gorillaz latest album The Fall was produced on an iPad using iElectribe and as a result, KORG and Gorillaz have now joined forces to create the new iElectribe Gorillaz Edition. If you don’t enjoy the musical stylings of the Gorillaz then there’s not much here for you. But why did you click on the link?

A total of 64 ready-to-use pre-programmed patterns are provided. This includes 32 patterns recreated from the most recent Gorillaz album The Fall, plus 32 remix patterns created exclusively for the iElectribe Gorillaz Edition. The sound team behind all of the patterns includes Stephen Sedgwick, who co-produced the fourth album Gorillaz album The Fall, as well as Korg’s highly-regarded sound team. The synthesizer engine features a selection of sounds from the latest Gorillaz album, The Fall. There are eight parts, categorized by instrumental category. Each part provides 16 sounds, delivering a total of 128 sounds. The Gorillaz Wave function lets you use the 16 step buttons to switch sounds, intuitively manipulating the sounds as part of your musical performance. 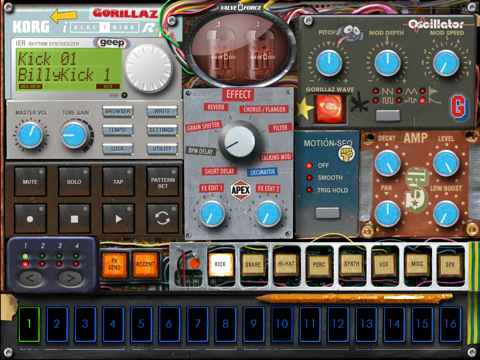 If you’ve used an electribe in real life – or an iElectribe app before then you’ll be right at home. But a basic knowledge of step sequencing is all you need. There’s a manual built in, with some quick start videos that will crash on you as you struggle to get to grips with all the buttons. As with all iElectribes, there is no song function but you can create lovely little grooves and export them – or share them with Soundcloud. Tunes are easy to throw together and the quality of the pre-recorded demos sets the bar really high.

If you have a USB camera connection kit (and no self respecting iPad musician should be without one these days) you can jam via a Korg nanoPad2, Akai Lpd8 or similar, which enhances your ability to make professional sounding music on the go. The only grey area for me was what you can do with the beats you make – with all the Gorillaz samples loaded into the app I think there may be one or two legal grey areas and some small print to wade through.

Nevertheless KORG iELECTRIBE Gorillaz Edition is a fun little app and is a worth inclusion in your beatmaking toolkit.