iDJ is the iPhone and iPad app from Numark that lets you create professional DJ mixes from your iPod music library in seconds. With the just released iDJ 2.0 you now also have the ability to play your iDJ music via AirPlay to your AV systems and start and stop the mixes via headphone controls which make iDJ perfect for use at live parties and performances.

When you buy iDJ you get both an iPhone and iPad version as a universal binary. The iPad interface (now with iOS 4.3 and iPad 2 support) is where iDJ truly shines. The power of iDJ lies in its automatic beat matching technology derived from Numark’s MixMeister series of products. After you import a song into the app from your iPod library, the app scans the song and reads its BPM along with the sonic-waveform and tempo of the tune. It then automatically creates transitions between the songs you place in the mix queue. This is not a radically new idea, but I’ve never seen it done with this much accuracy before until iDJ. 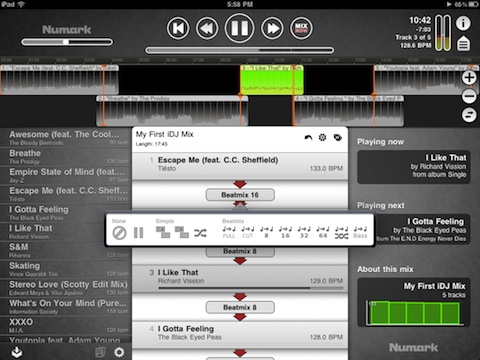 Another great feature in iDJ is the ability to change the default transition of 8 seconds to make up your own custom mix. There are 8 different beatmix transitions, ranging 8, 16, 32, and 64 seconds, to full, cut, bass swap, and even a ping pong effect. You can also pic, a full, cut, or simple crossfade. Each time you drag and drop in more tracks, your mix is automatically updated and its overall BPM average is dynamically updated to make the entire mix flow.

There is a pinch to zoom sensitive time line for your playlist that shows the music as it moves across. You can drag, zoom and view this area to your heart’s content. Double tap anywhere on the timeline to jump to that part. When you zoom in on a song on the time line you can grab its ends and drag to change the fade in and fade out points manually. There is a Mix Now button, which you can tap anytime you want during live playback. What this button does is jump to your next transition point with enough precision to keep the mix in tact. This is great for when you want to quickly change out a song that might be too long or say if you are getting a request.

Using iDJ requires very little Disc Jockey knowhow, but it does help if you know enough to be able to mix songs with similar beats per minute. There is a nice graphical legend in the info panel that shows you a bar chart of your songs in the mix and their relationships. For a smooth mix make sure your tracks line up without too much up and down, and preferably all green bars.

If you have AirPlay capable speakers hooked up to your home system, you can now listen to your mix wirelessly from iDJ, like Apple TV or AirPort. The iDJ app also supports background playback. I’m actually writing this review while listening to a mix on the iPad. 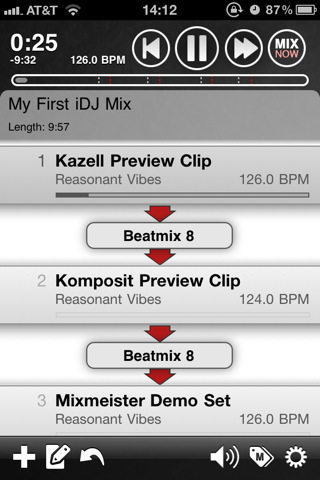 I was initially worried it would take a long time to import music into the app, since that has been my experience with most apps that require this step. WIth iDJ the import process itself seems to be one step faster than what I expected. Browsing lets you filter songs by genre, artist, song or album. You can’t search for songs by keyword however. The BPM scanning is also quite fast.

Here are a few features I wish iDJ would add next. There should be a way to sort the songs. Right now they are by default sorted by name, but being able to sort by artist and BPM would be great. Also it would be good to have some sort of a folder structure for the songs to keep them organized instead of having everything in one large list. Another feature I wish the app had was to be able to export an MP3 of the mix. This would be great for showing off your mixes. There should also be a way to export just the mix sequences, without the actual music, and import them into another app. This would be great for making a mix on your iPad and then listening to it on your iPhone and vice versa.

iDJ is a definite must buy app for any music enthusiast or casual user who wants to have some fun or whip up a new mix for a house party. Perhaps even a great solution for mobile DJs looking to pre-create mixes to be played at an upcoming gig. iDJ has some room for growth, but as it stands, it is already a couple notches above the competition in the App Store.