Live Nation is a concert promotion and ticket selling company. Their Live Nation app for iPad, iPhone, and iPod touch allows you to browse and purchase tickets to upcoming shows. Since merging with Ticketmaster in 2010 Live Nation has become the world’s largest promoting company, selling more than 50 million tickets annually. Attendance to their events exceeds that of the NBA, NFL, and NHL combined. However Live Nation, like most other (near) monopolies has its share of criticisms. With such a lack of other ticketing outlets customers are forced to pay whatever fees Live Nation wants to charge, as well as having massive control over the concert scene in general. But as it turns out such a comprehensive list of shows makes for a great app. 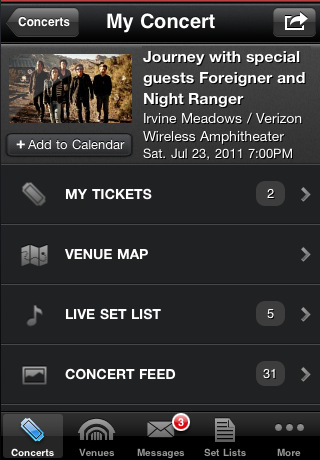 True story: Upon opening the Live Nation app I was thrilled to see it begin to search my music library. Within a few moments I had a personalized list of upcoming shows in my area. I was begrudgingly impressed. I saw that Little Dragons were coming to town in October, but was disappointed to find that the show was sold out. I familiarized myself with the app a bit more and searched for a few other bands before moving on with the rest of my life. The very next day I opened the app to find a notification informing me that Little Dragons had scheduled a second show in my area! It turns out I’ll get to see Little Dragons perform after all, thanks to the Live Nation app. Although I can’t speak to the frequency of such an experience I can certainly say it speaks volumes to how useful the Live Nation app can be.

Live Nation app users can flip through lists of favorite artists and venues, creating favorites lists as you go along. Not only can you purchase tickets directly through the app, but you can also receive a digital copy of your ticket with a barcode so you don’t have to worry about remembering your hard copy of the ticket or standing in a will call line. Another nice feature of the Live Nation app is an extensive database of set lists of previous shows. Hardcore fans can now peruse through the set lists of their favorite bands to see what songs they tend to perform. 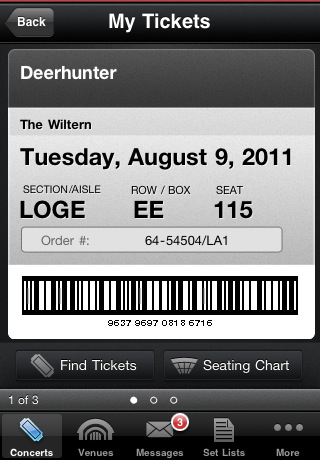 Unfortunately for the music industry, Live Nation has a decent monopoly on concert ticket sales, allowing them to levy unreasonable fees and unchecked control of the industry to the detriment of musicians and fans alike. I seize the rare chance to purchase tickets from another source, but for the most part there really is no other option. This only goes to show the sheer size of the company however, and what a useful tool a concertgoer wields by utilizing the Live Nation app. There were a number of complaints in the appstore regarding crashes and other glitches, but I have yet to experience anything of the sort. If you’re looking for a great way to stay up to date on upcoming concerts then the Live Nation app is a must have.