Animoog is the newest iPad app from Moog Music. Despite being a four letter word, when it comes to synthesis, names don’t get much bigger than Moog. A legend in analogue synthesis, Moog’s contributions to the growing iOS musical apps scene are always fascinating.

Animoog is the latest of such efforts. Proving that disses aren’t the sole preserve of the hip-hop community, Moog have billed their newest app as the first “professional” analogue synthesis app for the iPad. Ouch. 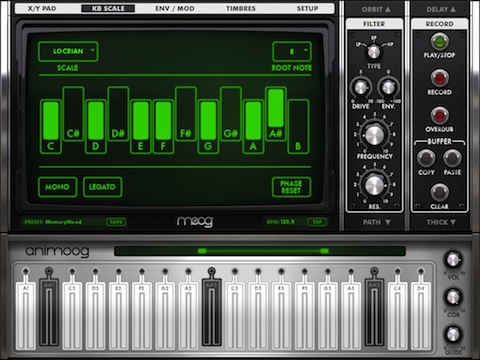 So what separates Animoog from the slew of other music apps out there? And does it justify its hefty $30 price tag? 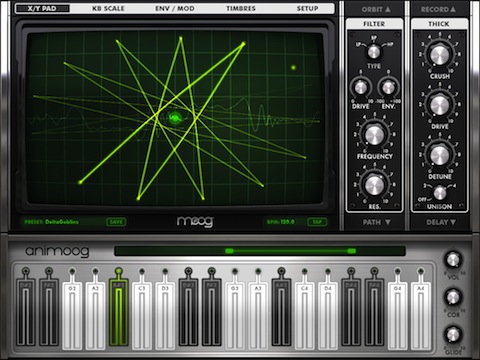 Moog’s “mission statement” as far as Animoog is concerned, is to take their real world analogue synthesis prowess and apply it to the modern touch surface paradigm, which means user can quickly sculpt incredibly fluid and dynamic sounds that live, breathe, and evolve as you play them.

So does this dream align with reality? And is it any fun? Well yes and yes. The first thing you’re likely to notice when you fire up Animoog is the giant X/Y pad that dominates the screen real estate. This “allows you to dynamically move through an X/Y space of unique timbres to create a constantly evolving and expressive soundscape”. Is less high-falutin’ language it enables you to visualise the way your sounds evolve and interact with the development of notes as you play them. The app-dev team obviously had a lot of fun with this as the present sounds come in a colourful variety of shapes like triangles, stars and question marks. 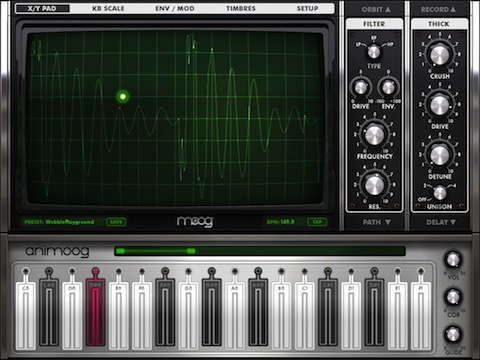 Rather than ignore the realities of touch screen life or religiously try to recreate existing synths, Animoog fully embraces the iPad’s surface. With Polyphonic Modulation you can simply slide your fingers to control multiple modulation parameters in Animoog right from the keys, which makes doing so whilst performing feel natural and intuitive. In addition Moog threw in some Polyphonic Pitch Shifting, so you can easily manipulate the exact pitch of each note in a chord by rotating or sliding your fingers.

An app synth is only as good as what you put in and Animoog’s diverse library of timbres is derived from analog waveforms captured from classic Moog oscillators, both vintage and modern, and run through a boutique’s worth of high-end outboard and analog signal processors, including modular synth panels, Moogerfooger pedals and more.

So whilst “the first professional synth for the iPad” might seem like a bold claim, it’s definitely the first to justify such a hefty price tag.