Spotify has finally released its long awaited iPad app today. No more suffering through using 2x mode! Thanks to its growing marketshare in the US and vast library of over 18 million songs, Spotify is the largest subscription based music streaming service on earth, serving over 13 million users in 14 countries and growing, which is expected to earn upwards of $900 million in revenue in 2012.

Navigation in the iPad version of Spotify uses a Twitter-like layout with a left nav of tabs and sliding vertical decks of information. The main tabs are Search, What’s New, Inbox (which I never use), Playlists, and People. The Spotify iPad app features full artist bios, search as you type, a mini-playback bar, a full screen playback screen, crossfade support and more. 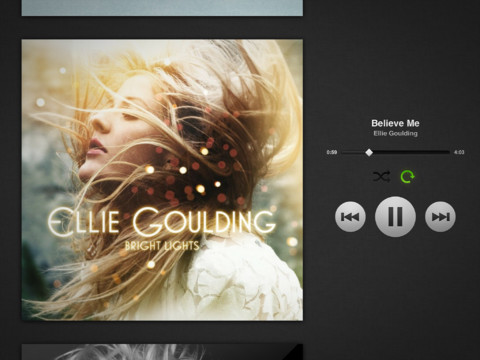 Playlists are displayed using a 4 grid box of album covers which is visually nice to look at. While listening to any song you can jump to the artist detail page to see related artists, top hits and read their full bio. The app layout adjusts smoothly to support both landscape and portrait views as you rotate your iPad. Overall, the app is designed to make it easier to discover new artists and dig around the vast library of songs. 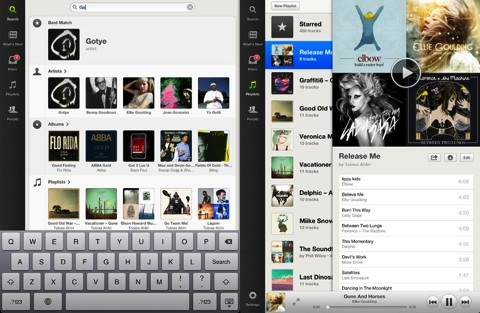 1) Predictive Search shows your results as you type. This is a unique feature so far to the iPad app, since it is missing from the Spotify iPhone app. Search results include a “Best Match”, Artists, Albums, Playlists, and an infinite dynamically loading as you scroll list of Tracks.

2) Full Screen now playing window with large buttons, album cover and swipable interface to skip back and forward to the surrounding tracks. From this playback screen, tap the users icon on the bottom to jump to the full artist bio and listing page.

3) Artist Bio and Track Listings featuring a two pane layout that contain a short bio, related artists, and Top Hits along with all albums on the left. On the right side you can read the full biography of the artist and swipe thorugh a gallery of photography on the band. The bios contain links to other musicians in Spotify which make exploring more interesting.

4) AirPlay on the iPad along with Mirroring displays now lets you both listen to and watch your Spotify iPad content on your Apple TV for a fully immersive experience.

5) A full featured What’s New area resembles the desktop Spotify app and includes Recommended Albums, Trending Playlists, Top Tracks (among friends and near you), and Newly Released albums and songs.

6) Better playlist management and creation. Although not perfect, the iPad app allows ease of adding various tracks to a playlist. Tap and hold on any track to have the info buttons slide up, including a + button for adding a track to any playlist.

7) The ability to Star a song, add to a playlist and share it via Facebook or Twitter are available on both the full screen playback screen as well as the mini playback bar on the bottom of the screen. To get this feature just tap once on the small album cover to display the menu which took me some time to discover at first. 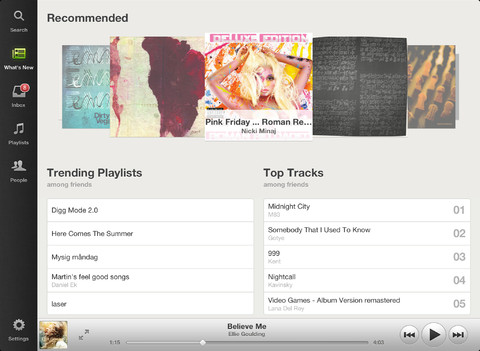 What’s Missing and or requests for future updates:

– Spotify Apps which are available on the desktop version of Spotify are not supported on the iPad version of the app yet. These apps are great for discovering new music, amongst other things.

– There is no way to jump from a currently playing song to the album the song is from. This feature is really helpful on the iPhone for quickly browsing through songs in an album, but is missing on the iPad. Tapping on the Artist head icon only takes you to the top level artist page, which is nice, but you will now have to swipe up and down to look for the currently playing album manually which is very tedious.

– No on-screen volume control is provided in the Spotify iPad app. This means you’ll have to use the physical buttons on the iPad to adjust volume settings, which can be tedious depending on your listening situation.

– Being able to search inside a playlist is a feature which would help a ton, especially for really large playlists. This feature would also be good to have in the desktop app.

– Navigating back and forth across vertical panes in the app is not intuitive and overwhelming. Once you’ve gone a few levels deep, you can double tap any tab icon to get back to the main pane. At one point after navigating 12 panes deep, the Spotify app crashed on me, which is not surprising considering how much memory each window sucks up.

– In full screen mode the album cover art is not using HD quality images, which is only apparant on the new iPad’s retina display.

– No Radio feature is provided to iPad users. Being able to quickly play randomly generated songs (think Pandora) is a convenient and frequently used feature offered in most music streaming services, but is only available on the desktop for Spotify.

– Spotify still has no way of browsing songs and artists by genre nor top music charts. This is a useful feature seen in competing services such as Rdio and MOG.

– One final personal request, would be to allow users to customize the tabs on the left nav. I for one would love to be able to access the Starred playlist as a tab item, as well as being able to hide or remove the Inbox icon.

Overall
The Spotify iPad app works amazingly fast and is a joy to use on the iPad 3. Barring a few missing features, which will hopefully be added in future updates, this tablet version of the Spotify app was well worth the super long wait and will help to further justify the $10/month price tag of the service.