The ABC Player app works on the iPad and lets you watch ABC TV shows for free with sponsored ads. You can also find past episodes and a schedule of upcoming shows. The watching feature works great and even better with iPad mirroring on your TV. There is no way to send just the audio to AirPlay speakers. The app also has the ability to remember where you left off so you can come back and finish a show where you left off. You can use it either over WiFi or 3G. Viewing shows in portrait view lets you browse other episodes under the video, or you can rotate the iPad to landscape view and the video will zoom to fill the entire screen.

There are a few tabs to get started in the Featured section with slideshows including Most Popular, Latest Episodes, and Comedies. The schedule tab is broken down by day of week and you can toggle on a week grid as well. All Shows is where you can view a list of everything available grouped by categories like news and specials. 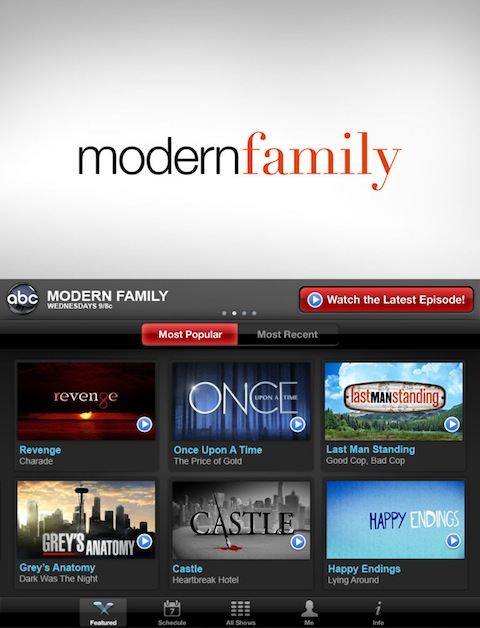 Shows
There are lots of shows available to watch. Right now the app has the Disney Parks Christmas Day Parade and Charlie Brown for the holiday season. You get full-length episodes of ABC shows including Modern Family, Grey’s Anatomy, No Ordinary Family, Desperate Housewives and more. The full list of ABC shows you can watch on the iPad are:
Last Man Standing
Once Upon A Time
Pan Am
Revenge
Suburgatory
You Deserve It
Body of Proof
Castle
The Chew
Cougar Town
Desperate Housewives
Extreme Makeover
General Hospital
Grey’s Anatomy
Happy Endings
Jimmy Kimmel Live!
Man Up!
The Middle
Modern Family
One Life to Live
Private Practice
The View
Wipeout
20/20
AbC New Specials
Boston Med
Karaoke Battle USA
Mind Games
Nightline Prime
This Week
What Would You Do?
and many more…

Ads
Each show starts with a video advertisement, and you can see a dash marker on the seek bar which shows where the ads will be coming in. Ads tend to be served up about every 10 minutes or so and are 30 seconds each.

Issues
The biggest issue with the ABC app if anything is that it is not available for the iPhone yet. Some users are reporting streaming issues with getting stuck after an ad is done playing, but I did not noticed this while watching a few shows.