It seems the older we get, the more boring anything we present on paper becomes. Once you’re seriously turning in reports/manuscripts/memos, you’re confined to a handful of fonts that are deemed acceptable. As the owner of nearly a thousand fonts, I find this atrocious. Where’s the creativity? Amit Harel has one solution for iPhone and iPod Touch users: the MyFont app, which turns your own handwriting into a unique font.

It’s fairly simple: just tap Create New Font, and the app will take you through the alphabet twice (for upper- and lower-case letters) and the numbers 0-9. Fill in the appropriate letter within the lines (or not, depending on your writing), and then tap the box of the next letter to move on. If you’re not happy with your writing, tap the eraser icon at the top left corner of the box. You can also move through the letters by scrolling and tapping them on the top row. The ubiquitous statement that uses all 26 letters of the alphabet will slowly appear below, for you to preview your font. Once you’re done, fill tap the green check mark to save your font. 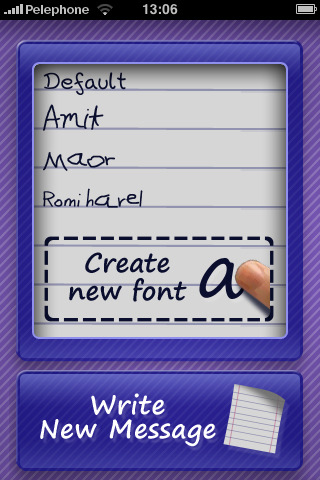 You can then compose a message with your own handwriting using the iPhone’s keyboard. If the standard white background is too boring (understandable, as you just created your own font), you can use a preloaded background–or even your own photo–to write on. You can adjust the font’s color and size, as well as its positioning. Just tap the third icon on the top and use your fingers to shrink, swivel, or move the text block. Another neat function is the option to include stickers (the fourth icon), which can all be adjusted in the same fashion as the text block. After you’re done with your creation, you can email it out to anyone.

I don’t really know why anybody would want my schizophrenic handwriting as a font, but if you’ve got awesome fingermanship, this app is for you. Even better if you had a stylus; then you could really make a font out of your actual handwriting. You can create as many fonts as you desire, but it’s rather a shame that you can’t use it outside of this app. The stickers are a fun inclusion, and with the ability to load your own photos to write on, you’ll never lack for canvas. It’d be fun to try this out with another language, especially an Asian one, but that’s an experiment for another time.