Let’s face it: much of radio makes for boring noise nowadays. Listening to audiobooks and podcasts while driving have become increasingly popular–especially if your commute is in the horrendously trafficked Los Angeles–but what if you want to take notes after hearing something particularly noteworthy? (Public service announcement: don’t take notes while operating a moving vehicle…even one in traffic.) Screen Four Software has figured it out for you: an app called Audio Footnote. 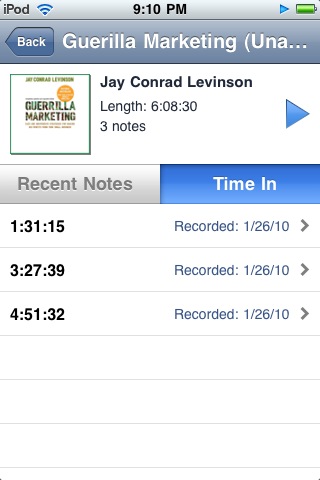 Using Audio Footnote, making notes during an audiobook or a podcast is now a cinch: just record it! While playing the file, just tap the Record button to start; the playback will pause while you do so, and will automatically continue from the same spot after you tap the Record button again to stop. All audio notes are auto-saved with the date and time into the program. Playing a note is as easy as tapping it. You can share your notes through within-app email, or even by using your Evernote account (requires Evernote Premium, which supports attachments).

Audio Footnote is a cleanly functional app that students would probably get a lot of mileage out of, but I’d love to see more from the developers on this app, more supported file types and notation by typing (which would probably prompt a name change) being chief among them. The latter is promised on a later update, so you should probably grab it now while it’s on sale for a limited time ($1.99 instead of $4.99), but there are other note-taking apps that offer a lot more functions than Audio Footnote.