Storyist is an iPad app for professional story writing. As the song says, there’s no business like show business and the world of Film and TV in particular have one maddening eccentricity that persists down to this day (well more than one but this was relevant). Since the golden days of Hollywood, when writers would bash away at noisy typewriter, scripts would be delivered to movie moguls in Courier 12pt font – all that typewriters could produce. Which is all well and good except, except now in 2011, with all the wonders of typography at our fingertips a script not precisely formatted to look like a 1920s typewritten manuscript is more likely to hit a studio executives bin than one that pits cowboys against aliens (that script was impeccably typed, with so much care put into the formatting they must have forgotten to stop themselves and say “hold on this idea is ridiculous”. 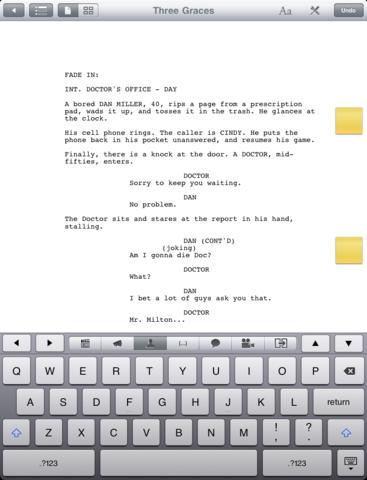 Anyway, the point of that long winded opening, in addition to wanting to express my distain for Cowboys vs Aliens, was to highlight the importance of formatting in the world of Film & TV. They are sticklers for detail – so both the stakes and demands of users in that field are high.

Enter Storyist, an amazing app for screen and novel writing for the iPads. Swooping into the gap left by Final Draft and Scrivener refusing to take the iPad seriously, Storyist works with industry standard guidelines to enable you to tell your story to the masses and to get it read by the select few who can make that happen. 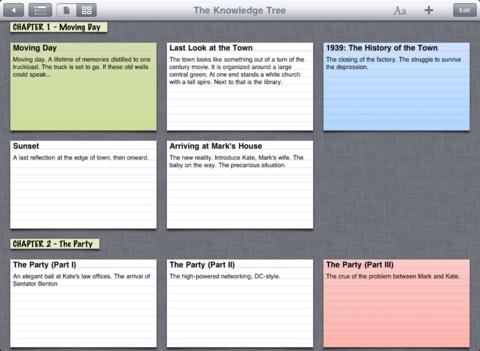 Writing with Storyist is a delight. One of my favourite writing apps for the iPad is IA writer (I’m using it now if you must know) as it extends the iPad soft keyboard – providing a row of simple navigation tools at the top so you can tab between words, add parentheses and such with ease. Storyist takes this concept to the next level with script elements available as icons on the top level of this bar. Script elements are the varying chunks that make up a script – stage directions, character, dialogue, scene headings etc. Being able to jump between these elements makes reformatting a cinch and is really helpful in making it clear where you are in a story. Good writing software “gets of out the way” and allows you to tell your story – its hard to be creative when you’re busy worrying about line idents, where you should or shouldn’t be using caps, and line breaks. Good story writing software does this. Storyist does this. I shouldn’t really have to say anymore.

I will however. Storyist also has great built-in support for index cards. If you are working out the various beats to your story you can see all the various scenes you have and work out the best order and play with structure – invaluable if you’re trying to make the next Memento. You can also jot down comments on the script as you go along.

You can open .rtf, .txt and .fdx files so you can work with scripts from a wide range of sources. And like all the best apps it syncs with Dropbox (as well as iTunes and email). If you have a story to tell, Storyist is a great app to help you tell it.