Learning a new language gets harder as we get older, so older brains need as much help as they can get. Flashcards are a popular study aid, but carrying around 500 of them is tedious and not space efficient at all. The next best thing, obviously, is to carry them around in your Apple device! Kelly Black has created such an app in Hey Lango, a “do-it-yourself practicing and sharing tool.” Over 50 languages are supported.

Upon launch, you’ll be asked to choose the language you’ll be learning. Hey Lango helpfully uploads a starter pack of flashcards as examples (I chose Chinese Traditional, which came with colors and some phrases you’d use at a hotel). You can basically add anything you want to a flashcard, from words to phrases to conjugations, even entire poems, if you wish. Add a flashcard by tapping the + button at the top right, then type in the word in either language as it shows on the flashcards. Make sure you have that language keyboard activated in your device, or else you’ll have to rely on the sometimes dubious translations of Google Translate (utilized by tapping the button with the red and blue arrows beneath the English flashcard). While on this screen, you can also add audio and a picture to help you learn. Hey Lango neatly incorporates an integrated Flickr search, so you can use the image function even without a camera. 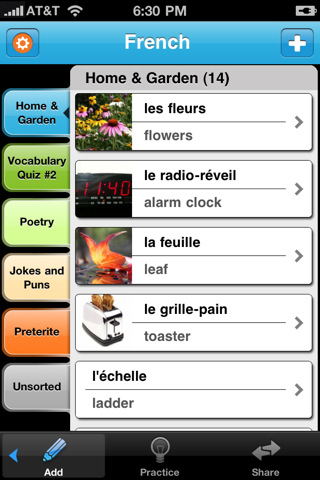 Flashcards can be organized into sets, or they will be added into the Unsorted set by default. Just tap Add to Sets while making one, and then either choose the sets you want to add the card to (a flashcard can be part of multiple sets), or make a new set by tapping the + button. Set tabs are seen on the main page, going down the left side; to edit the set list, tap and hold on a tab and wait for a menu to pop up. They can each be a different color, be deleted, or rearranged. 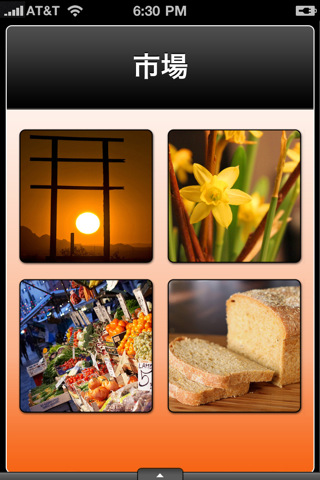 Tapping on the Practice tab will take you to four different options that you can drill yourself with: Classic Cards, Four Up (my personal favorite), All Audio, and Screensaver. Classic Cards acts like a normal flashcard routine, where you’d flip over a card to see the definition. Four Up is a matching game, while the Screensaver mode pulls images from Flickr based on a flashcard word (my least favorite, as the pictures usually don’t match up to what they’re supposed to depict). One of the best features Hey Lango has is the ability to share your cards with other users, which is coupled with the ability to download others’ cards–you need to create a username before doing so, however. Another way that this app makes things easier on you is by allowing you to import a spreadsheet from Google Docs to make flashcards. Both are awesome features that would make lazy learners happy. Only one language can be shown at a time, but it’s probably for the best; wouldn’t want to confuse yourself, after all. Hey Lango is a slick, well-designed app that truly strives to pave the way in your quest to acquire a new language. For only $1.99, it’s a steal.