I’m sure this is old news to everyone, but Facebook has really exploded onto the social networking scene. And little wonder, with its gradual implementation of every other social networking site’s unique functions. Facebook is where it’s at, and it’s where over 500 million people are on at any given day. One of its biggest components – introduced later in its infancy and redone many a time – is the option to upload photos, thereby making it even easier for people to share their lives. 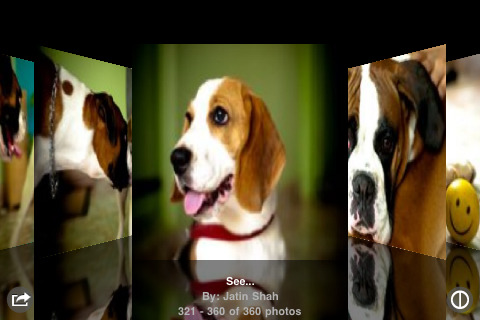 If you have more than a handful of friends, then you know that attempting to read everything comes up on your News Feed is a fruitless gesture. Aditi Technologies would like make keeping up with your friends a little easier, at least on the photography end. JustPics is an app that pulls all the recent photos your friends have uploaded and displays them, Cover Flow-style. Once you log in, tap Get New Uploads to refresh the stream, and start swiping through them to view previews.

When you spot a photo that interests you, tap on it to enlarge and read the full caption. On this page, you can share it, Favorite, and comment on it (each of the buttons on the bottom of the screen, respectively). Swipe across the picture to go back to the stream. Tapping on the arrow on the bottom left corner while you’re looking at the stream brings up a menu, where you can go view your Favorites and your own photos. The last option, Select Friends, allows you to choose whose pictures show up on the stream, but that neat function is only available in the paid version. Also in the paid version is the ability to see older pictures that aren’t in the stream, as well as unlimited Favorites (the Lite version only gives you five slots). 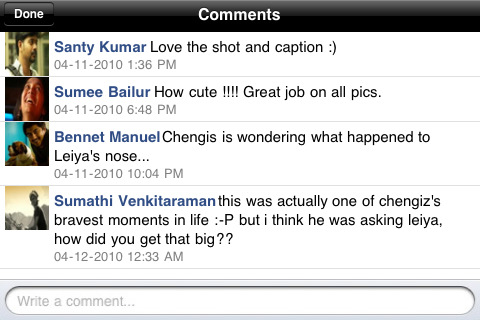 As neat as this app is, I feel like only certain people would find it very useful. I myself don’t try to keep up with everybody’s updates, much less their photo uploads, so the Lite version would probably be okay for my own usage. The paid version, however, has so much more functionality that you’d probably want to fork over the $1.99 to have it. While the Cover Flow stream is cool and a very Apple look to have, I found swiping through it somewhat of a chore: too much swipe and you’ll speed through 20 photos at a time, and too little of a swipe takes you to the enlarged version instead. Speaking of the enlarged version, I don’t see the reasoning behind why we can’t swipe through the photos when in that view. That would eliminate the swiping problem above, at least. Also, I find it odd that there’s no portrait option, not all photos are in landscape orientation, after all. So, if you’re on Facebook for the photographs, you’ll probably want to look into JustPics Lite to see if it’ll make your life easier. Otherwise, just stick with the free Facebook app itself.