exfm for iPhone and iPod touch is the mobile version of the popular music social media site ex.fm by Extension Entertainment Inc. If you’re unfamiliar with ex.fm, think Twitter or Facebook meets iTunes. Can exfm revolutionize the way you share music with your friends and discover new songs and artists? Well, maybe.

exfm has a great concept. You “note” songs you think are awesome (think about “liking” something on Facebook) and your friends will see that you noted that song, and they’ll get to listen to it. exfm links to your iPod app and lets you play your own songs, all the while hitting the “note” button when you come upon something you want others to know about. You can even connect your Twitter, Facebook, Tumblr, and Last.fm accounts, and tweet or post what song you’re currently listening to, if you’re into that sort of thing. 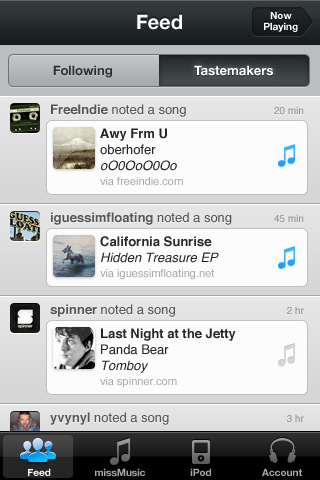 The opposite side of exfm comes from listening to the songs your friends have noted that show up in your feed (think Twitter feed or Facebook News Feed). The great thing about this is you can listen to full songs, not 30 second clips, and one tap of the shopping cart takes you to iTunes where you can purchase the song on the spot. It’s a slick and easy interface that is enjoyably simple. You can also choose to see what songs exfm’s “Tastemakers” have noted. These aren’t songs you’re likely to hear on the Top 40 radio station anytime soon, but you’re sure to find something that you think sounds great.

The problem with exfm is finding friends that use it as well. Remember Ping? I never used it because I didn’t know anyone that used it. exfm lets you find friends by entering in their name, but only if you know they’re using exfm. While the app lets you connect to your other social network accounts, you can’t search your friends and followers from those networks and see if they’re using exfm. You can’t even search your phone contacts for fellow users. So your only option is to ask your friends and find out who is using exfm, or to try to talk them into trying it out. And they’d be well suited to try it, I think it has potential. 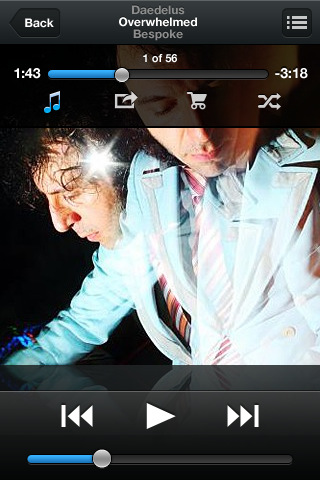 exfm is a great idea with average implementation right now. If you’re an early adopter of social trends or social media, or you like finding or sharing new music, this is one you’ll want to try. There’s great potential with exfm, and with a few features that will hopefully come in future updates, exfm just might stick. For now, give it a shot, you’ve got nothing to lose, this one’s available in the App Store for free.