I Help You, or iHelpYou, depending on where it’s written, is an iPod Touch or iPhone app for devices running iOS 4.0 or higher, although there is nothing about it which suggests that it actually uses any of the 4.0 software’s features. It is also a piece of unsigned software, which means it hasn’t quite met the App Store’s requirements. Because of this, any prospective user is going to either need to have a jailbroken device, or will have to learn how to apply such a hack.

First and foremost, the iHelpYou package can be downloaded totally free of charge through Cydia. It is distributed from the ModMyi.com repository, which is run by a group of iOS mod enthusiasts. This repository comes prepackaged with Cydia, which in turn is automatically installed during the jailbreak process. The application was developed by someone using the name Defense2000x. 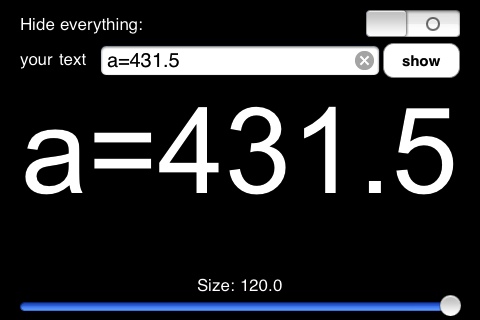 The developer’s description of I Help You’s package doesn’t offer much insight into its function. From what I gather, and from what it actually does when I run it, I can only assume it is supposed to help classmates in the cheating process. It’s called “I Help You,” as in “I help you cheat on the test,” which would have been a more descriptive name, albeit a long one.

When the application installed itself onto my home screen, the name changed to iHelpYou, possibly because the other name didn’t fit. The icon for iHelpYou is a picture of one of the default iPhone wallpapers, showing that the developer probably wasn’t putting much effort into this particular project.

Once I touched the lazily made globe icon, I was greeted by just one very basic screen. The screen was filled with a few simple iOS interface elements on a black background. There was also a place to input text, and that text showed up on the center in big white letters so the hypothetical person copying my answers could see it clearly. There was also a switch for hiding everything except that text to clear up the clutter.

The slider at the bottom controls the text size, and it is useless. If the slider is all the way on its largest setting, the text automatically scales as large as it possibly can, which is ideal if the text needs to be seen from across the room—why make it any smaller? Fortunately I didn’t test this in an actual classroom to help someone cheat, but to be fair it could serve that devious purpose. Overall, The iHelpYou app is nothing special and is somewhat amateurish.

At the very least it’s a mildly unique idea, so for that reason I give it a 2 out of 5 star rating.